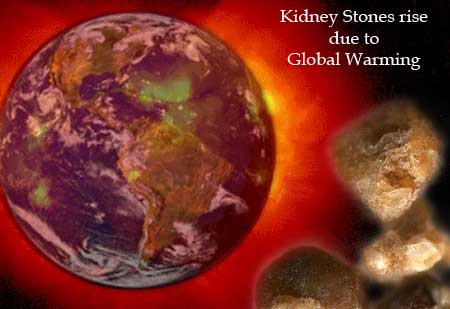 Global Warming has been linked to a lot of weather related health issues. However, ‘kidney-stones’ is one problem that no one can even think of associating it with the global warming phenomenon.

A study conducted by the researchers at UT Southwestern Medical Center and UT Dallas says that people living in the warmer parts of the world will now have to start worrying about kidney stones. According to the study, Global Warming may lead to the formation of what is called as the “kidney-stone belt” into warmer parts of US.

Kidney stones are caused due to dehydration, which the researchers suspect will increase due to global warming. Apparently, the incidences of kidney cases will be higher by 1.6 million to 2.2 million by 2050 due to higher temperatures; raising the cases by as much as 30 percent.

“This study is one of the first examples of global warming causing a direct medical consequence for humans,” said Dr. Margaret Pearle, professor of urology at UT Southwestern and senior author of the paper.

“There is a known geographic variation in stone disease that has been attributed to regional differences in temperature,” said Dr. Pearle. “When people relocate from areas of moderate temperature to areas with warmer climates, a rapid increase in stone risk has been observed. This has been shown in military deployments to the Middle East for instance.”

Kidney stone (nephrolithiasis) is a condition of the kidneys which is characterized by the formation of solid crystals of dissolved minerals in the urine. The risk factors for developing the condition are low volume of urine, low intake of liquids or serious dehydration.

In US, kidney-stone has been found to be a common problem, especially in the Southeast which has been described as the ‘kidney-stone belt’ due to the high number of cases, consisting of regions like Alabama, Arkansas, Florida, Georgia, Louisiana, Mississippi, North Carolina, South Carolina and Tennessee.

“Obviously, this escalation is a problem when considering the costs associated with treating kidney-stone disease,” said co-author Dr. Yair Lotan, assistant professor of urology at UT Southwestern. “Nationwide, the cost of treating these new kidney-stone cases could rise as high as $1 billion.”

The findings can be implied worldwide where the change in temperature can be co-related to the kidney disease note Dr. Pearle and her colleagues. Therefore, the researchers are on their way of conducting more studies in near future.

The study has been published in the Proceedings of the National Academy of Sciences.