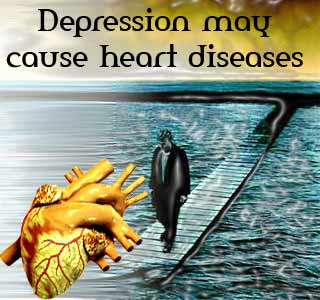 For long, researchers have associated heart diseases and depression. Apparently HealthDay reporter, Karen Pallarito, affirms that a recent research reveals that symptoms of depression may trigger cardiovascular trouble. A study shows that victims of depression especially those with some physical indications like disturbances in sleep, loss of appetite or lethargy are more vulnerable to develop heart diseases.

Jesse C. Stewart, assistant professor in the Department of Psychology at Indiana University-Purdue University, Indianapolis, and the study’s lead author commented, “Our findings raise the possibility that the physical symptoms of depression are particularly toxic to the cardiovascular system. Identifying the most harmful aspect of depression is important, because we will then know which specific components to target with our treatments.”

He further added, “Our study is important, because it is the first to simultaneously examine the links between all of these negative emotions and sub-clinical atherosclerosis. In addition, we broke depression down into physical and cognitive/emotion symptom clusters, which is uncommon. Ultimately, we plan to use the data from this study and similar investigations to develop a psychological treatment for adults at risk for cardiovascular disease. We hope that our treatment, when combined with standard treatments, will help to prevent the development of cardiovascular disease.”

For three years a measurement of the internal carotid artery thickness of 324 adults was carried out by Professor Stewart’s team. The study revealed that thickening of the arteries over the years was mainly associated to depressive symptoms and not anger or anxiety. A detailed analysis further indicated while cognitive and emotional symptoms of depression had no relation whatsoever with atherosclerosis, the physical symptoms of depression could cause it.

In agreement, Robert M. Carney, a professor of psychiatry and director or the Behavioral Medicine Center at Washington University School of Medicine in St. Louis, remarked, “There currently exists no evidence that treating depression will help prevent heart disease. The biggest reason is that studies that would be needed to draw that conclusion would have to be large and therefore very expensive. Hopefully, an added bonus will be to reduce the risk of developing or suffering from heart disease.”

Even though a review of epidemiologic data, published in 2007 by Dr. Francois Lesperance, a professor in the Department of Psychiatry at the University of Montreal in Canada noted that each of these theories are supported by evidence, scientists are yet unclear whether depression does really cause cardiovascular problems. Researchers indicate that other factors like diet may also affect depression and heart diseases.

Moreover, Professor Stewart will be examining the possibility of a reduction in cardiovascular risks and hence heart diseases due to positive emotions like happiness or related factors like optimism. He is planning to investigate the link between hostility and depression, thus revealing various measures of cardiovascular risk.

Professor Stewart’s study has been published in the Archives of Internal Medicine.