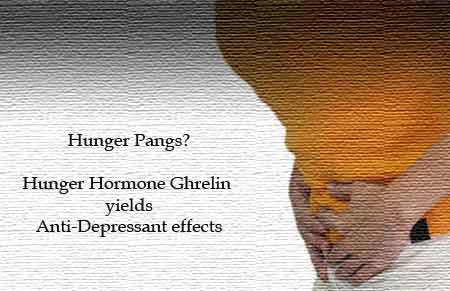 Have you ever noticed how during a stressful event, we tend to take support from comfort eating. Although comfort eating may add in that extra pounds to the waist, but a new study displays as to how the hunger hormone ‘ghrelin’ may have an anti-depressant effect.

Ghrelin know to increase when a person does not eat, but the same hormone may also stand as a support to defend against symptoms of stress-induced depression and anxiety. Ghrelin usually gets produced in the gastrointestinal tract and it gets produced usually when one is fasting. The hormone’s role is to send hunger signals to the brain and it is also known to rise during periods of anxiety and tension.

“Our findings in mice suggest that chronic stress causes ghrelin levels to go up and that behaviors associated with depression and anxiety decrease when ghrelin levels rise. An unfortunate side effect, however, is increased food intake and body weight,” mentioned Dr. Jeffrey Zigman, assistant professor of internal medicine and psychiatry at UT Southwestern and senior author of a study appearing online today and in a future print edition of Nature Neuroscience.

Dr. Michael Lutter, instructor of psychiatry at UT Southwestern and lead author of the study remarked, “Our findings support the idea that these hunger hormones don’t do just one thing; rather, they coordinate an entire behavioral response to stress and probably affect mood, stress and energy levels.”

To check on Ghrelin effects, Dr. Zigman and his colleagues restricted the food intake of laboratory mice for 10 days. This caused their ghrelin levels to rise to quadruple. Whereas the control mice, which were allowed free access to food, the calorie-restricted mice displayed lower levels of anxiety and depression when subjected to standard behavior tests for depression and anxiety such as mazes and other tests.

So the study not only mentions about the anti-depressant effect of the hormone but also links how we tend to overeat when faced with a stressful situation. The researchers also plan on a future study to find out which area in the brain ghrelin may be acting on to cause the antidepressant-like effects. The present study has been supported by the National Institutes of Health, the Foundation for Prader-Willi Research, the National Alliance for Research on Schizophrenia and Depression and the Disease-Oriented Clinical Scholars Program at UT Southwestern.

Continue Working in Improved Environment to Cure Musculoskeletal Back Pain