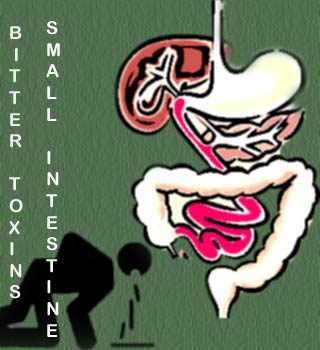 Quite often we tend to spit out food that tastes bitter, sometimes even feeling sick and throwing up. If you have experienced a similar feeling, here’s why. Its actually our gut tasting that can beat out poisons. That’s what a new study claims- our small intestine can sense bitter toxins in the food.

According to researchers at the University of California, Irvine a new study suggests that the small intestine is capable of sensing and reacting to bitter toxins in the food. It further reveals that the human intestine can detect potential poisons that may enter it and hence react to lower the harm they cause.

Earlier studies have shown that taste receptors similar to those on the tongue that help us differentiate between sweet and bitter tastes are also found in the small intestine. Tongue-based receptors send a message to the brain and those in the gut are believed to trigger other chemical signals that are involved in digestion.

“We have evolved mechanisms to combat the ingestion of toxins in our food. This provides a framework for an entirely new area of research on how our bodies respond to what is present in our diets,” mentioned Timothy Osborne, a UC-Irvine molecular biology and biochemistry professor.

Many natural plant poisons carry bitter taste flavours and hence may be detested by humans and other animals and hence when we do eat something bitter a completely different mechanism may get into action.

Researchers have now discovered a significant association between receptors in the gut that can identify bitter foods and high levels of a digestion-slowing hormone called cholecystokinin. The hormone along with slowing digestion was also found to lower the appetite even stopping us from eating anymore. Apparently when we keep potentially poisonous food in the stomach, it has greater chances of being excreted from the body before its ingredients are absorbed.

While the study presently involves mice, researchers are hopeful the study extends to humans as well. The researchers now indicate that it will help scientists develop better therapies for ailments ranging from cancer to diabetes as sweeter-tasting medicines could be more effective.

The study appears online in the Journal of Clinical Investigation.