While there is not a complete cure for AIDS yet, the picture is not that gloomy. According to researchers at the University of Alabama at Birmingham (UAB) and Simon Fraser University in Vancouver, British Columbia, the 13 years since late 1990s, has the life expectancy of people with human immunodeficiency virus (HIV). 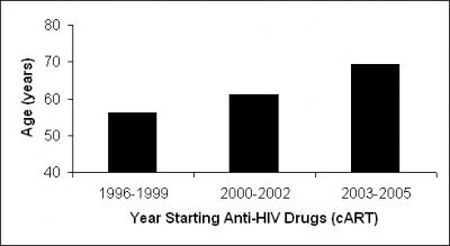 The advancement in the antiretroviral therapy has dropped the death rates due to AIDS by 40 percent in Europe and North America. As many as 14 different studies were conducted in all that involved 43,355 HIV-positive participants belonging to the aforementioned regions. Owing to the results (as seen in the graph via UAB) from the study, there is a need of spreading the therapy to the entire world.

The studies were aimed at determining the effectiveness of “combination antiretroviral therapy (cART)” which involves a combination of drugs; in the 43,335 HIV patients.

“Since their introduction in 1996 cART regimens have become more effective, better tolerated and easier to follow,” said Michael Mugavero, M.D., an assistant professor in UAB’s Division of Infectious Diseases and a co-author on the study.

“We are now seeing the benefits of years of research, hard work and efforts to make these medications widely available. This has led to dramatic improvements in life expectancy, but patients who start cART with more advanced HIV infection do not have the same level of benefit,” Mugavero said.

However, in comparison with the general population, the life expectancy in HIV positive patients with other chronic illnesses has found to be lower in average. An HIV positive person starting cART from the age of 20 can live upto 63 that has been estimated to be 20 years than a life of normal non-infected person.

A compilation of the studies done by The Antiretroviral Therapy Cohort Collaboration, including UAB, Simon Fraser University and many other research sites around the world has been published in the British medical journal – The Lancet.