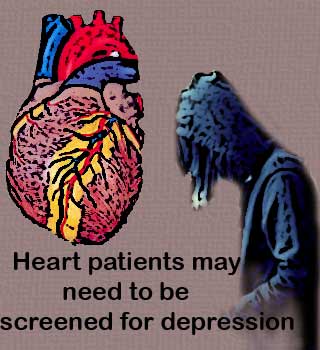 A recent research by doctors at the American Heart Association suggests that patients with heart problems should undergo regular screening for depression. According to the researchers heart patients have such high chances of depression that they may need immediate medical attention.

A committee of the heart group reveals that individuals who have survived a heart attack or have been hospitalized for coronary diseases are at a three times higher risk of developing depression. This in turn could prove fatal for these patients as major depression may make them oversee their medicines, diet or any other medical advice. It could also make these patients cynical towards life, destroying their inner will to get better.

Erika Froelicher, an author of the new guidelines and a professor at the University of California, San Francisco, School of Nursing, commented, “If depression occurs, and an individual feels like they can barely get up in the morning to face the day, they are unlikely to do the self-care management that is necessary for optimal recuperation like going and exercising and taking medication. They may potentially have a second heart attack subsequently compared to people who are not depressed.”

The current research involved an analysis of data gathered from many previous studies on patients with heart problems. An examination of this piloted data revealed that that the chances of depression are three times more common in patients who have suffered a heart attack or who have undergone bypass surgery as compared to the general population.

Earlier studies indicate that nearly 15-20% heart attack patients show some common symptoms of major depression. Heart patients who are not hospitalized show depression rates of about 9.3 as against healthy individuals who show a depression rate of 4.8. The committee hence urges all patients with heart diseases to get immediate screenings for depression done. The researchers additionally suggest that the signs of the mood disorder needs to taken seriously by mental health professionals.

The researchers further mention that the risks of depression may be higher among female heart patients. Experts assert that those hospitalized for coronary problems or for unstable angina or angioplasty should be checked for signs of depression. The researchers are however not quite clear on the reasons behind this link.

The research has been published in the journal Circulation.