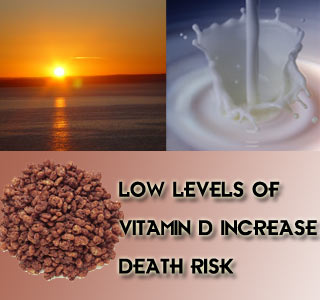 A study by Johns Hopkins researchers suggests that insufficient levels of vitamin D results in a significantly increased risk of death. Believed to be the most conclusive evidence to date, the study follows other recent studies that link low levels of vitamin D to certain cancers, diabetes, and bone and immune system problems.

Obtained from milk, fortified cereals and exposure to sunlight, the optimum blood level of 25-hydroxyvitamin D (25[OH] D) has been suggested to be 30 nanograms per milliliter or higher.

Researchers mentioned, “In conclusion, the lowest 25(OH) D quartile (less than 17.8 nanograms per milliliter) is associated with a higher risk of all-cause mortality in the general U.S. population. Further observational studies are needed to confirm these findings and establish the mechanisms underlying these observations. If confirmed, randomized clinical trials will be needed to determine whether vitamin D supplementation at higher doses could have any potential benefit in reducing future mortality risk in those with 25 (OH) D deficiencies.”

The study was conducted by Michal L. Melamed, M.D., M.H.S., of the Albert Einstein College of Medicine, Bronx, N.Y., and colleagues. They examined vitamin D levels in the 13,331 participants of the Third National Health and Nutritional Examination Survey (NHANES III) administered by the Centers for Disease Control and Prevention. Between 1988 and 1994, Vitamin D levels of the participants were collected. These were tracked through 2000.

Based on their vitamin D levels, participants were divided into four groups (quartiles). On comparing those in the highest vitamin D level quartile, a 26 % increased death rate was observed in the group with the lowest level. The Vitamin D level was less than 17.8 nanograms per milliliter.

1800 participants died over a median of 8.7 years of follow-up. Among these nearly 700 died from some form of heart disease with 400 being deficient in vitamin D.

Researchers found that an assessment of vitamin D levels had no particular association with the risk of cardiovascular disease and cancer alone. Low vitamin D levels can however be linked with death due to their effect on blood pressure. Researchers noted that they play an important role in determining the body’s ability to respond to insulin, diabetes and obesity risk.

The team plans next to work on various high doses of vitamin D test. These will help find if nutritional supplementation results in fewer deaths and lower incidence of heart disease, including heart attack or moments of prolonged/severe chest pain.

A thorough investigation of biological triggers like obesity or hypertension that might offset or worsen the action of vitamin D on heart muscle or whether vitamin D sets off some other reaction in the heart is also next on the list.