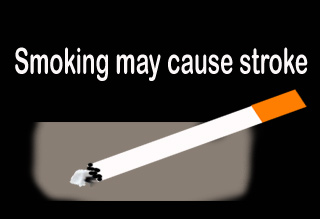 It’s a known fact that smoking is very harmful to the body. A latest study has recently added another harmful pointer in the disadvantages of smoking. It apparently states that smokers, having a family history of brain aneurysm, may supposedly stand a higher risk of suffering from a stroke attack.

The subarachnoid hemorrhage stroke is evidently considered to be one of the fatal bleeding types of stroke. This stroke is said to attack around an estimated 35 to 40 percent of the general population.

Evidently the study scientists studied around more than 300 brain aneurysm stroke attack sufferers. Around more than 1000 people, who had not suffered from this attack, were also evaluated. Smokers and non-smokers were also included in the studied participants.

Study author, Daniel Woo, M.D., University of Cincinnati, Ohio, says that, “While all people should be advised to quit smoking, our findings suggest that there is an interaction so that if you smoke and you have a family history of aneurysms, you are at an extremely high risk of suffering a stroke from a ruptured brain aneurysm.”

Seemingly, irrespective of diabetes, body mass index, high blood pressure, alcohol use and education level, the results of the study did not vary.

They apparently conclude that quitting smoking may prove to have more than one benefit for people with a family history of stroke.

The study was supported by the National Institute of Neurological Disorders and Stroke. Their findings are published online on Neurology, the medical journal of the American Academy of Neurology. It is believed to soon be published in print in the Neurology issue.