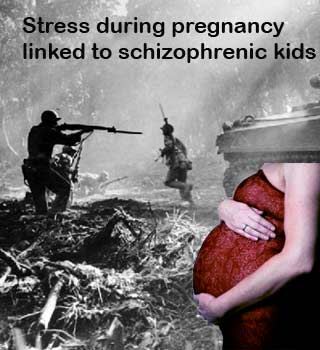 The study was led by author Dolores Malaspina M.D., M.Sc.P.H. along with Anita Steckler and Joseph Steckler Professor of Psychiatry at the NYU School of Medicine.

The researchers commented, “The stresses in question are those that would be experienced in a natural disaster such as an earthquake or hurricane, a terrorist attack, or a sudden bereavement.”

Malaspina remarked, “It’s a very striking confirmation of something that has been suspected for quite some time. The placenta is very sensitive to stress hormones in the mother. These hormones were probably amplified during the time of the war.”

She further added “A developing foetus requires some exposure to maternal stress hormones as it normalizes their stress functioning. But women experiencing anxiety or excessive stress would do well to address it before a planned pregnancy and to have good social support systems.”

Data from the Jerusalem Perinatal Study that linked birth records to Israel’s Psychiatric Registry was used. It analysed 88,829 people, born in Jerusalem from 1964 to 1976. The study associates an increased susceptibility to schizophrenia in the offspring because of maternal exposure to severe stress during the early months of pregnancy.

The research revealed that the during the peak of the Arab-Israeli war in June of 1967, the children of women who were in their second month of pregnancy had significantly higher incidences of schizophrenia over the following 21-33 years.

An assessment of medical records found that the pattern affected females much more than males and was thus gender specific. After the war in 1967, in comparison to females born at other times, females who had been in their second month of foetal life during the war had a 4.3 times higher chance of developing schizophrenia.

The researchers however mentioned that the hypothesis which suggests that the greatest vulnerability to schizophrenia is in the second month of pregnancy can only be considered supportive rather than a proof.

Malaspina indicates that handling daily stressors during pregnancy should not alarm pregnant women in general.

The study faces a drawback of including a sample of only a limited population. In addition, information on the exact length of gestation was absent. So there is quite a possibility of underestimation of developmental stages.

The study is published in the open access journal BMC Psychiatry.