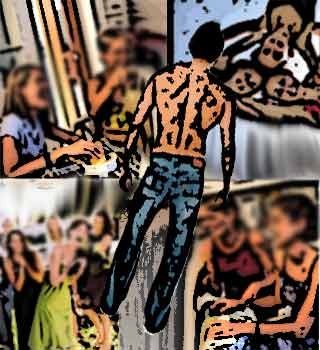 All you men always on the prowl for something ravishing to feast your eyes upon are going to enjoy this. If you are not a one-woman man you can rejoice as a recent research suggests that the key to a long life could be as simple as getting a second wife. The research reveals that men from polygamous cultures outlive their monogamous counterparts by nearly 12 %.

Virpi Lummaa, an ecologist at the University of Sheffield, closely analysed marriage practices and life span of men over 60 years of age from 140 countries. Considering the socioeconomic differences, data was gathered from the World Health Organisation records. The team also assessed church-gathered records for 25,000 Finns from the 18th and 19th centuries, when people tended to move little, no one practiced contraception and the Lutheran Church enforced monogamy.

Lummaa commented, “Ultimately, remarried men don’t end up with any more grandchildren. If anything the presence of a grandfather was associated with decreased survival of grandchildren. Our monogamy score is a crude first stab, and we’re working to find multiple ways to assess marriage patterns”

Lance Workman, an evolutionary psychologist at Bath Spa University, mentioned, “If you have got more wives to look after you, they might fuss over you and that might help you live longer. We know that in monogamous societies married men live longer than bachelors. If you look at polygamist societies, men are quite competitive towards other men because the pressures are bigger.”

The research shows that all participants who practiced polygamy to varying degrees lived on an average 12 % longer than men from 49 mostly monogamous nations who limit their affections to one woman at a time. Researchers suggest that men benefit from the fuss made over them by a gaggle among women. Such men also tend to take better care of themselves as they get older and have a large family to feed. The care and attention of several wives may also benefit them in the long run

The grandmother effect may explain why women are able to live so long after menopause—unlike nearly all other animals. According to the scientists the phenomenon shows that for every 10 years a woman survives past the menopause, she gains two additional grandchildren. Some of the grandmother’s genes are furthered by doting and spoiling of grandchildren which may aid their survival. Men in contrast, can reproduce even in their 60s, 70s and 80s which can be assumed to explain their longevity.

The findings suggest that the key to male longevity may be the result of their biological selection for long-lived women. Men who father more children and have more wives lead a longer life. If female survival is the main explanation for male longevity, then monogamous and polygamous men would live for about the same length of time.

However long-lived men in polygamous cultures could also account their life span to evolutionary forces acting over thousands of years. A strong competition for women in polygamist societies ensures that only the fittest specimens get the girl and have children.

Researchers assert that the new study is a great prediction and could be a valid hypothesis.

We’re not saying it; research proves it….so maybe you just need to get yourself hitched again.