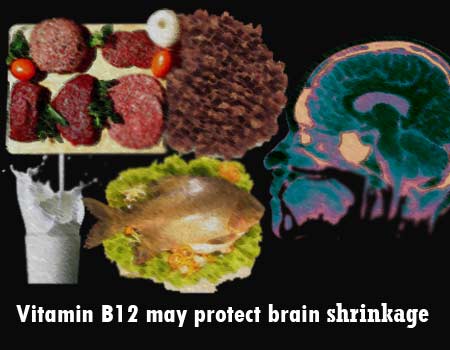 The brain’s ability to function efficiently as we age has been the bone of contention for many years now. A novel study now says that a diet that is rich in vitamin B12 which comprises of meat, milk, fortified cereals and fish could just help protect the brain against brain shrinkage or brain atrophy in old age.

“Many factors that affect brain health are thought to be out of our control, but this study suggests that simply adjusting our diets to consume more vitamin B12 through eating meat, fish, fortified cereals or milk may be something we can easily adjust to prevent brain shrinkage and so perhaps save our memory. Research shows that vitamin B12 deficiency is a public health problem, especially among the elderly, so more vitamin B12 intake could help reverse this problem,” mentions study author Anna Vogiatzoglou, MSc, with the University of Oxford in the United Kingdom.

Vogiatzoglou additionally added, “Without carrying out a clinical trial, we acknowledge that it is still not known whether B12 supplementation would actually make a difference in elderly persons at risk for brain shrinkage. Previous research on the vitamin has had mixed results and few studies have been done specifically with brain scans in elderly populations. We tested for vitamin B12 levels in a unique, more accurate way by looking at two certain markers for it in the blood.”

Brain scans of 107 participants who were between the ages of 61 to 87 years was carried out as part of the study. They were also subjected to physical exams and memory testing along with a blood test to check the vitamin B12 levels in their body. After 5 years, these volunteers were subjected to a second round of brain scans and memory tests. No participants had a deficiency of vitamin B12 but had low levels of within a normal range.

Brain atrophy is a common problem among old adults as also is the deficiency of Vitamin B12. Alzheimer’s disease and impaired cognitive function are some of the conditions linked to brain shrinkage along with risk factors that include high blood pressure, diabetes and high cholesterol.

The researchers however mention that the study does not really clarify whether supplements of vitamin B12 would benefit memory loss in the same way.

The study is published in the Sept. 8 issue of Neurology.