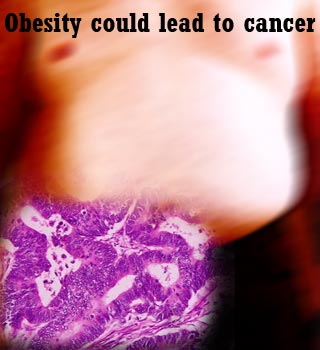 If you have just been thinking about losing some weight, do it now. With the list of obesity-related disorders never ending, here’s another reason why you should cut the flab. A new research links obesity with cancer. The study reveals that overweight people are highly prone to a range of common cancers

Conducted at the Washington University School of Medicine in the US, the study has found that for every pound you gain, you are closer to developing at least one of the seven types of cancer. The chances of contracting the disease however could reduce for those who shed some weight.

Ed Yong of Cancer Research United Kingdom, commented, “People associate high body weight with conditions like diabetes and heart disease, and a lot of people are not aware of the links between body weight and cancer. If you look at these cancers, they include two of the most common, breast and colon, and some of which have very low survival rates, pancreatic and oesophagus. So body weight has a substantial impact on cancers that are common and those that are difficult to treat. This is a very important issue. Maintaining a healthy body weight is one of the most important things you can do to prevent cancer after not smoking.”

The study was based on analysis of data from around the globe on obesity, weight loss and weight gain in association of some of the most common cancers namely cancers of the breast, kidney, pancreas, colon, prostate, oesophagus and endometrial. The study found a clear relationship between the rate of cancer and increase in the body mass index (BMI).

Of all cancers, breast cancer in postmenopausal women was found to have the strongest link to weight gain. For every 5kg of weight gained the risk of the cancer increased by 5%. An examination of colon cancer revealed that men who put on 6kg or more were at twice the risk of catching the disease as against those men who lost two kgs or more. Men who put on 21 kgs or more after reaching 20 years of age had a 60% increased risk of getting cancer in comparison to men who had gained less than 5 kgs.

While there was no clear link between obesity and prostate cancer, men who did gain more than 10% of their body weight and had a BMI more than 24.4 were found to be twice as likely to contract prostate cancer as men with a lower BMI.

On the contrary the researchers found that losing weight significantly lowers the risks of the cancers.

The study is published in the British Journal of Cancer this week.