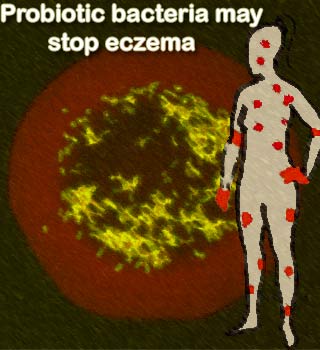 If a recent study is to be believed then Kiwis may have found the bug that could have eczema on the run. The prevalence of childhood eczema may be reduced to half by a cheese-derived bacterium. The researchers claim that a probiotic supplement, applied to the affected part, significantly halted eczema in infants under two.

By the age of two, the skin disease eczema is known to affect nearly 30% of infants in New Zealand. The severity of the disease may vary from a small patch of scaly dry skin to large areas covering almost the entire body.

Julian Crane of Otago University, Wellington, mentioned, “Our study has found when you give probiotic supplement L. rhamnosus during the last five weeks of pregnancy, and for six months after birth while mothers are breast feeding, and then you give their infants the same probiotic up to two years of age, there is a 50 percent reduction in eczema.”

“This is an exciting and interesting result because we have compared the effect of two different probiotics in the same study and shown that one has an effect while the other is no different from a placebo,” Crane further added.

For the study researchers from Universities of Otago and Auckland analysed the use of two probiotic supplements in 446 mothers and babies. Often found in the intestines of infants, probiotics are naturally occurring microbes. An increase in the prevalence of eczema is being correlated to a decrease in the natural occurrence of these bacteria in the recent years. No similar preventive effect for eczema was found by the second probiotic, Bifidobacterium lactis.

Though the scientists are unable to identify the actual method of functioning of probiotics, they are assuming it to alter an infant’s developing immune system in a way that reduces allergy. Another theory they suppose is that some probiotics may alter the early infant intestine so that allergens cannot pass so easily into the circulation and set up allergic reactions.

Presently, the researchers are following up on these children to see if the benefits are sustained. They are also in talks to examine its effects on asthma or hay fever as the children grow up.

As of now there is no way to prevent eczema, and treatment relies on skin moisturising and corticosteroid creams.

The Journal of Allergy and Clinical Immunology has published this study.