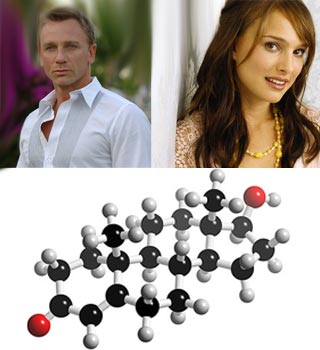 How important is facial attraction for you? Well if you are one of those ladies who are attracted to macho-looking men, blame it on your hormones. A unique study by researchers at the Aberdeen University’s Face Research Laboratory reveals that women with high levels of testosterone are more likely to be attracted to masculine-looking men while men with high levels of the hormone prefer the typically feminine women.

Levels of testosterone, it appears may be directing the rules of attraction. So in case you have a thing for actors like Russell Crowe and Daniel Craig at one time and more feminine-featured heart throbs like Orlando Bloom another day, now you know why. Also all you men who prefer women resembling Star Wars actress Natalie Portman and Lost star Evangeline Lilly are the ones attracted to more feminine faces.

Dr Ben Jones, a psychology lecturer, commented, “People preferred different types of face in the session where their testosterone level was highest than in the session where it was lowest. Since masculine men and feminine women are thought to produce the healthiest children and sex drive is higher when testosterone levels are also high, these findings suggest that men and women in hormonal states where their interest in sex is highest, show stronger attraction to high quality – or healthy – mates.”

The first of its kind study involved a series of tests on 70 women and 30 men that included questions to complete short face preference tests in which the participants were shown pairs of masculine and feminine faces. Four different test sessions were conducted each week apart. On each occasion testosterone levels were measured using saliva samples to determine the role testosterone plays in the attraction of the sexes.

Researchers found that as the levels of the hormone fluctuated in individuals, their opinions and attitude also underwent some changes. They suggest that people were not always attracted to the same type of face, but would find different people attractive depending on their testosterone levels. An overall preference for women and men with more feminine features was found, which suggests that the “tall, dark and handsome” stereotype features may not after all be the most attractive male form.

The researchers further plan to study the significance of voice and odour in terms of sexual attraction.