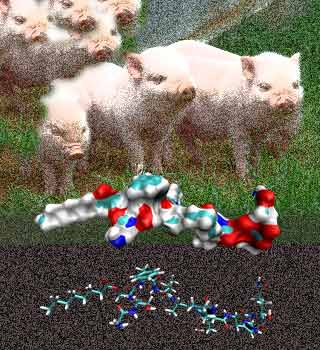 For once you’re going to wish you were a pig! No we are not trying to freak you out. The other day we had mentioned about a new surgery that could well make you less hungry. Now a holy grail in the field of obesity and weight loss is that researchers have actually been successful in suppressing the hunger hormone ‘ghrelin’ in pigs.

Researchers at John Hopkins claim to have figured out a non-invasive way to lower appetite by preventing the body from manufacturing the hunger hormone ghrelin. This novel method could pave the way for a lasting solution to obesity in many people.

Aravind Arepally, clinical director of the Centre for Bio-engineering Innovation, design and associate professor of radiology and surgery at the Johns Hopkins University School of Medicine, reveals, “With gastric artery chemical embolisation, called GACE, there’s no major surgery. In our study in pigs, this procedure produced an effect similar to bariatric surgery by suppressing ghrelin levels and subsequently lowering appetite.”

“Obesity is the biggest bio-medical problem in the country, and a minimally invasive alternative would make an enormous difference in choices and outcomes for obese people, added the Indian American medical scientist.

The study was based on a minimally invasive mode of vaporizing the main vessel carrying blood to the top section or fundus of the stomach. The fundus is unable to make ghrelin without a good supply of blood and nearly 90% of the body’s hormone is produced in the fundus. Accompanied by colleagues, Aperally conducted the research over the course of four weeks using 10 healthy, growing pigs. After an overnight fast, the animals were weighed and blood samples were taken to measure baseline ghrelin levels.

Equipped with an X-ray for guidance, the scientists threaded a thin tube up through a large blood vessel near the pigs’ groins and then into the gastric arteries supplying blood to the stomachs. Once there, the researchers injected five control pigs with one-time saline injections in the left gastric arteries. Other five pigs were given one-time shots of sodium morrhuate. The chemical is known to destroy the blood vessels.

Next, the group monitored ghrelin levels in the pigs by taking samples of their blood for a period of one month. The findings revealed a decrease of up to 60% from baseline in the levels of the hormone in the GACE-treated pigs.

Though limited, the team suggests that efforts to safely and easily suppress grehlin have met success. They are hopeful this hunger-killing technique in pigs can become a non-invasive alternative to bariatric surgery.

The researchers add that pigs were the best option for this research because of their human-like anatomy and physiology.

The research is reported in the September 16 online edition of Radiology.