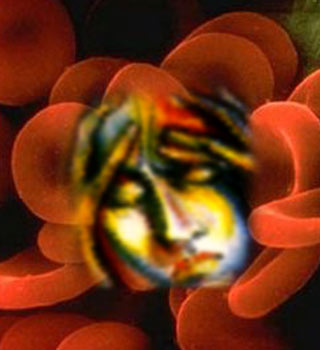 According to a team of Australian and Italian researchers people who suffer from migraine are at increased risks of developing blood clots. Though migraines are not really associated with atherosclerosis or hardening of the arteries, but they could be a risk factor for blood clot in veins.

Earlier studies had revealed that migraine patients are at really low risks of getting a resulting stroke. But the new study reveals otherwise. An alternative explanation for the increased cardiovascular disease risk among these patients is that the blood of patients with migraine may be prone to coagulate more easily than normal.

Study co-author Dr. Stefan Kiechl, from the department of neurology at Innsbruck Medical University, in Austria, asserted, “Our study refutes the widespread view that migraine [patients] are more likely to have hardening and narrowing of the arteries, [known as] atherosclerosis. Alternatively, it suggests that migraine patients are more prone to develop blood clots in their veins”

Kiechl additionally mentioned, “Because people that develop clots in [their] veins are also at an increased risk to develop clots in the arteries supplying brain and heart, our finding may in part explain the excess risk of stroke and heart attacks in migraine patients.”

Researchers studied 574 patients in Bruneck, a village in the alpine region of northern Italy between the ages of 55 to 94 years. They investigated the potential association between migraine and atherosclerosis as also assessed the risk of venous thromboembolism in patients with migraine.

Patients were interviewed on various occasions regarding headaches and venous thromboembolism over a period of 15 years. They were additionally subjected to high-resolution ultra sound testing. This testing helped in the assessment of atherosclerosis in the femoral and carotid arteries, two important arteries that supply oxygen-rich blood to the body. They were also medically examined for instances of blood clots.

Based on standard diagnosis criteria, a close examination of these volunteers showed that nearly 111 subjects suffered from migraine which included 36 with aura. Migraine patients were at an increased risk for venous thromboembolism, though the tendency for atherosclerosis was found to be less severe among the migraine patients. On an average 19% of patients with migraine developed venous thromboembolism as against 8% of non-migraineurs.

However researchers mention that patients with or without aura were no more likely than non-migraineurs to have atherosclerosis. Furthermore there was no difference in severity or 5-year progression of atherosclerosis between the groups. The team also claims that further research is needed to confirm these findings.

Painful headaches that can cause nausea and sensitivity to light and sound are common among about one-third of women and 17 % of men suffering from migraines. If untreated the condition can last from 4 to 72 hours and may be triggered by certain foods, stress, hormonal changes and physical exertion.

The study is published in the Sept. 16 issue of Neurology.