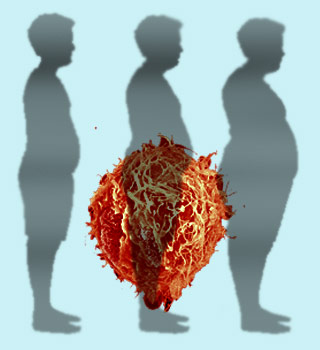 A number of studies in the past have associated obesity with serious conditions. A new study now reveals that overweight men have higher chances of dying of prostate cancer. Along with excessive weight, an increased level of insulin also puts prostate cancer patients at a higher death risk.

A joint work of researchers at the Harvard University and McGill University, the study included an analysis of nearly 2,546 men diagnosed with prostate cancer. The 24 year health study goes on to reveal that for prostate cancer patients who are overweight, the risks of dying from the condition are four times compared to their slimmer counterparts.

Lead author of the study, Dr. Michael Pollak mentioned, “Previous studies have suggested a relationship between prostate cancer progression and being overweight. This study strongly confirms those earlier findings and in fact points to a leading culprit which appears to be an excess secretion of insulin in these patients.”

“This should provide further impetus for men to avoid becoming overweight and to decrease their risk of metabolic syndrome by physical activity and diet” added Dr Jing Ma, co-author of the study from the University of Harvard.

The researchers suggest that extra weight along with high-blood concentrations of C-peptide in men who are diagnosed with prostate cancer highly increases their chances of dying from the disease. C-peptide is a protein commonly linked with diabetes. According to the researchers, the elevated chances of dying were significant and were completely independent of other clinical factors like the stage of the disease.

The study showed that overweight or obese men namely with a BMI (body mass index) greater than 25 and with high levels of C-peptide had a four-fold increased risk of dying from prostate cancer in comparison to those with a BMI below 25. The scientists assert that if we take a measurement of the blood hormone levels even before the cancer has been diagnosed, we can predict how the cancer will behave in the future years.

Though previous studies have showed an eminent link between obesity and risk of dying of prostate cancer progression, there was hardly any long-term prospective data on deaths specific to prostate cancer.

These findings, experts suggest should make way for further research to determine the part played by insulin, related hormones and metabolic factors in prostate cancer biology.

Funded in part by the Canadian Cancer Society, the study has been published in the Lancet Oncology.