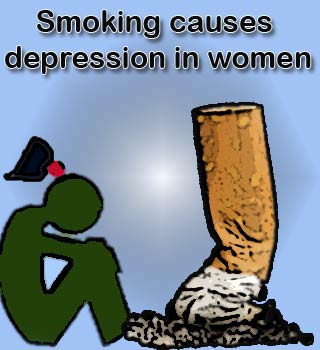 Here’s an eye opener for women who smoke. A novel Australian research reveals that women who smoke are at a greater risk of developing depression. So instead of calming your nerves, smoking could be doing just the opposite – it may increase your susceptibility of a depression disorder.

Led by researchers at the University of Melbourne, the study discovered that women who were heavy smokers namely smoking more than 20 cigarettes a day have a two fold risk of developing depression disorder in comparison to non smokers.

Study leader Professor Julie Pasco, mentioned, “It was at this point we were able to determine if depression had developed and investigate whether or not smoking pre-dated the onset of depression.”

The researchers examined a group of women in Australia who were part of the Geelong Osteoporosis Study and who had been followed up for nearly a decade. Subjecting these women to psychiatric tests showed that women who smoked had had higher chances of suffering from depression. Smoking significantly upped the chances of major depressive disorders among the 165 women who had depression issues and the 806 controls.

Thus the study led researchers to conclude that the risk of major depressive disorder is increased by 93% if women smoke. Experts associated with this study are hopeful that it gives greater efforts to dissuade people from smoking all over the world.

The October issue of the British Journal of Psychiatry has published this research which highlights the global disease burdens of smoking.