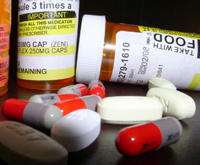 The antibiotic doxycycline is proving an effective treatment for a lymphoma of the eye linked to chlamydia infection, Italian researchers report.

This cancer of the eyelids and related tissues is called “ocular adnexal lymphoma of the MALT-type” (OAL). It isn’t fatal but can affect a patient’s quality of life. Previous research had suggested an association between OAL and infection with the Chlamydia bacterium.

This study included 27 OAL patients treated with doxycycline for three weeks.
Treatment with doxycycline was successful for two-thirds of patients, reported a team from the San Raffaele H. Scientific Institute in Milan.

“Our prospective trial revealed that doxycycline is a fast, safe, and active treatment for OAL, both at initial diagnosis and at relapse,” the study authors wrote.

They suggested that the antibiotic may prove useful even in OAL patients where other treatments have failed. The drug also offers patients an alternative to chemotherapy and radiation, which can cause serious side effects.