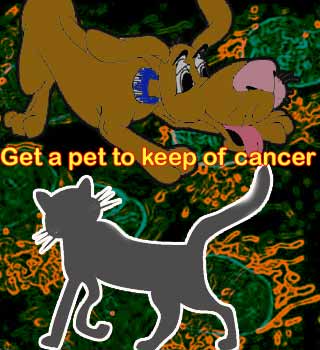 If you are pet person, we mean animals of course; you are going to enjoy this. Your pet it appears could be doing more than just giving you company in lonely days. Known to provide non-trivial health benefits like relieving stress and reducing heart attacks, pets could also be protecting you against serious diseases like cancer.

According to researchers from University of California, San Francisco, and Stanford University, also in California, a novel study reveals that people who own pets like cats and dogs have reduced chances of developing cancer by nearly a third. The study suggests that individuals who love animals have a really low susceptibility to non-Hodgkin’s lymphoma.

A cancer of the immune system namely the lymphs, symptoms include swelling of lymph nodes in the neck, armpit or groin, fever, especially at night, weight loss and tiredness. Common in people whose immune system is weak, the cancer is exposure to allergens is believed to protect against the condition. The cancer when left untreated can spread to the blood stream, and from there to almost any other body part, including the stomach, small bowel, bones and brain. As we age we are prone to contracting this cancer especially when we are over 50. Nearly 9 out of 10 cases of non-Hodgkin’s lymphoma (NHL) develop in adults.

“This large study provides support for a decreased risk between pet ownership and non-Hodgkin’s Lymphoma. And it’s possible this is related to altered immune function”, quoted the researchers.

“This study presents some evidence that owning a pet may reduce the risk of Non-Hodgkin’s Lymphoma. However much more research is needed to provide a conclusive link,” remarked Dr Jodie Moffat, health information officer at Cancer Research UK, “Scientists around the world are trying to find out what causes Non-Hodgkin’s Lymphoma and what affects a person’s chances of developing the disease, but there is still a lot to learn.”

As part of the analysis, scientists examined nearly 4,000 patients, almost 1600 of whom had NHL and the other 2500 were disease free. The study found that pet owners were at a 30% reduced risks of having the cancer than those who had never kept animals. The researchers further revealed that the longer the pet was in the house, the greater was the protection against the disease.

Experts believe that animals help their owners to relax and reduce their stress levels, thus lowering their chances of a heart attack and now even cancer. NHL affects around 10,000 people in Britain every year and if the trend continues, by 2025 health officials warn that NHL will be as common as breast or lung cancer.

With practically everything within our reach harming our health these days, we guess you don’t need a unique shielding guard-just get yourself a pet!

The study is published in the journal Cancer Epidemiology, Biomarkers and Prevention.