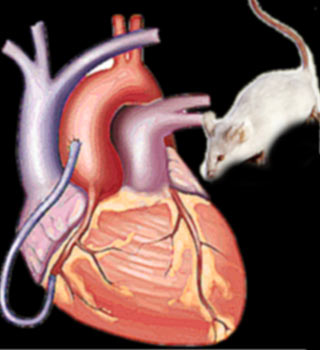 Can the heart in a foetus regenerate itself? Surprising as it may sound an international team of researchers found that the embryonic heart mouse astoundingly regenerates itself, a phenomenon until now associated only in non-mammalian species.

The work of Jörg-Detlef Drenckhahn of the Max Delbrück Centre for Molecular Medicine (MDC) Berlin-Buch with colleagues from Australia, the research reveals that provided some of the heart cells remain healthy, if the heart does happen to contract some disease during its embryonic development, it can regenerate itself to an extent that it actually becomes fully functional by birth.

“Hopefully, our results will lead to new therapies in the future. With the right signals, a heart that has been damaged might be stimulated to heal itself. At this point in time, the heart of the mice is like a mosaic. But even for a while after birth, the heart is capable of compensatory growth of healthy cardiac cells. Half of the cells are healthy, the other half not”, mentioned Drenckhahn.

The scientists found these results in female mice. In these mice, the healthy cells of the heart were found to divide more often and thus replaced the damaged tissue. To carry on with the research, experts switched off a gene, Holocytochrome C synthase, or Hccs in the developing hearts of mice. This gene is essential for energy production.

A wide known fact is that the heart needs energy to beat. On disrupting the energy production in the heart cells, the embryo may actually die of heart dysfunction. However when the cells are partly damaged, then with the remaining healthy cells in tandem, the embryo in fact manages to regenerate the heart.

Thus by switching off the gene, scientists found that all cells in the heart were affected by the defective energy production and the embryos died. However, some of the test mice who still had some healthy myocardial cells managed to survive. In fact these mice were born with a heart that was fully able to function.

With successful results on the mice heart scientists are hopeful the research may apply to humans as well.