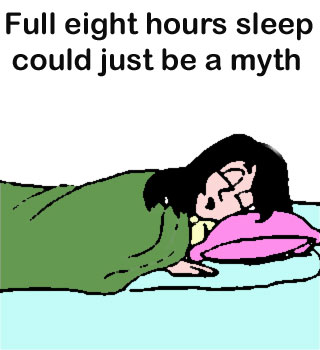 If you have dark circles and think they are because you are not getting enough sleep. Think again! In spite of your yawning sessions at work and eagerness to hit the bed, the eight hour sleeping pattern may just be a myth.

A novel research by Professor Horne, director of Loughborough University’s Sleep Research Centre, reveals that the need for a full eight hours sleep is just a myth. Also the fact that diabetes and obesity may be a result of our oh-so busy schedules may also not hold much truth to it.

Here’s what the researcher has to say “The fact is most adults get enough sleep, and our collective sleep debt, if it exists at all, has not worsened in recent times. My assertion is that the vast majority of people sleep perfectly adequately. That’s not to say that sleep deprivation doesn’t exist. But in general we’ve never had it so good.”

He further adds, “Just because we can easily sleep beyond our usual daily norm – the Saturday morning lie-in, the Sunday afternoon snooze – doesn’t necessarily follow we really need the extra sleep. Why shouldn’t we be able to sleep to excess, for indulgence? After all, we enthusiastically eat and drink well beyond our biological needs. Why shouldn’t it be the same with sleep? “Far from our being chronically sleep-deprived, things have never been better.”

The sleep expert asserts that it is in fact our genes that determine whether less than eight hours sleep keeps us fresh and alert during the day. While nearly half of us actually get less than five hours’ sleep a night, two-in-three have problems sleeping and four-in-five do not feel refreshed when they awake. According to Prof Horne we may be intellectually lazy. People who are under the myth that they are not getting enough sleep are creating anxiety and unwanted health concerns along with a greater demand for sleeping pills.

The researcher mentions that one line of evidence used to support the theory of chronic sleep deprivation is that most people typically sleep longer during holidays and at weekends – often up to nine or 10 hours a night to help pay off a sleep “debt”. However we are truly sleeping like we have never slept before, especially in comparison to a typical worker around 150 years ago, who toiled for 14 hours a day, six days a week.

So the fact that we are sleep-deprived could be just a blown out of proportion myth. The researcher further concludes that if only if we get less than five hours of sleep a night on a regular basis will our health start suffering.

The researcher has written these findings in the New Scientist magazine.