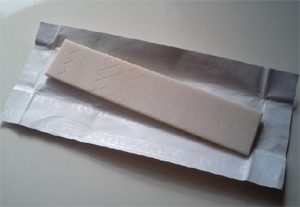 An article that was published in this week’s British Medical Journal warns that consuming too much of sorbitol, a sweetener used in chewing gums, could in fact cause serious bowel problems.

This warning has come soon after two cases of patients who suffered chronic diarrhea, abdominal pain and severe weight loss were reported. Reportedly, they were said to have consumed large amounts of sorbitol.

The doctors from Berlin, Germany said that the patients had consumed around 15 to 20 sticks of chewing gum daily. It was noticed that when they stopped this habit, both were said to have regained normal bowel function.

One of the patients, a 21-year-old woman, had been eating the equivalent of 18-20g of sorbitol each day. The average stick of gum has about 1.25g sorbitol – so, she was chewing through 15-18 sticks of gum each day.

The other patient, a 46-year-old man, was chewing about 20 sticks of sorbitol-containing gum plus approximately 200g of sweets (candy) each day – his total sorbitol daily intake was about 30g, the authors wrote.

As soon as sorbitol intake was stopped, both patients started having normal bowel movements (diarrhea subsided) and normal weight gain was achieved.

The authors say consumers are generally unaware of the possible side-effects of sorbitol, even though details are included in the small print of foods containing it. When consumers have gastronomical problems they are unaware that they may be caused by the laxative effects of sorbitol.

The authors conclude that sorbitol consumption may not only cause chronic diarrhea and functional bowel complaints, but also significant unplanned weight loss of about 20% of body weight. Any investigation of unexplained weight loss should include a detailed dietary history with regard to sorbitol-containing foods.

Hair sample used to predict the success of HIV treatment