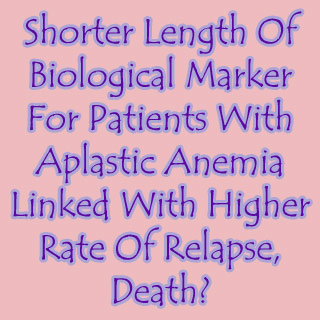 Severe aplastic anemia a condition in which the bone marrow is unable to produce blood cells may be treated with an immuno – suppressive therapy. A groundbreaking study claims that length of telomeres, which are the chromosome markers of biological aging, is not linked with response to treatment but is associated with a higher rate of relapse and lower overall survival. During relapse low blood cell count is registered by the patients.

In severe aplastic anemia, patients possibly suffer from life-threatening cytopenias wherein blood cell count is below normal. This condition can be seemingly treated by bone marrow transplantation or immunosuppressive drugs. Scientists supposedly recommend immunosuppression for only older patients or when an appropriate matched sibling donor is not available. However, most patients display relapse and clonal evolution in which chromosome abnormalities take place with bone marrow cells along hematologic malignancy.

Patients with severe aplastic anemia may have mutations in telomerase complex genes resulting in extremely short telomeres. Telomeres are a structure at the end of chromosome and shorten with each cell division. It is known that these structures act as protective caps to prevent erosion of genomic DNA during cell division. Investigators also believe that genetic factors and environmental stressors can shorten the length of telomere.

Authors highlight, “Survival between these 2 groups differed, with 66 percent surviving 6 years in the first quartile compared with 83.8 percent in quartiles 2 through 4. In conclusion, our data show that in a cohort of patients with severe aplastic anemia receiving immunosuppressive therapy, telomere length was not associated with response but was associated with risk of relapse, clonal evolution, and overall survival.”

104 patients that represented 57 percent responded to immunosuppressive therapy. No association between telomere length that was measured in pretreatment and the probability of response to therapy was observed. In the first quartile with shortest telomere lengths, 56.5 percent patients responded. On the other hand, in second quartile response rate was 54.3 percent and in third quartile was 60 percent.

It was claimed that in the fourth quartile, response rate was 56.5 percent. Further investigations revealed that telomere length was correlated with relapse, clonal evolution, and mortality. It was noted that telomere length was inversely associated with the probability of disease relapse. In the first quartile probability of clonal evolution was 24.5 percent and in quartiles 2 through 4 was 8.4 percent.

The study is published in the September 22/29 issue of JAMA.