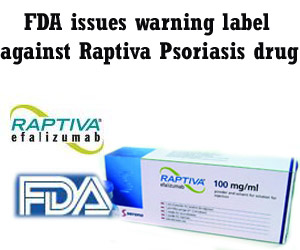 In the past week, the FDA has seen the approval of many new drugs. Along with this the US Food and Drug Administration (FDA) has also issued a label change to the common Psoriasis drug Raptiva. The change includes a Boxed Warning that reveals that the drug may increase the chances of fatal opportunistic infections.

Genentech Inc’s drug, Raptiva approved in 2003 is commonly administered to people with Psoriasis in the form of an injection once a week and it works by suppressing the immune system. Though it is not approved for children below 18 years of age, FDA is not stopping people from taking the drug. They just intend to bring to light the fact that those taking the drug should remain aware of its side effects. The FDA recommends patients to consult their physicians to check if they need to get vaccinated before starting the drug and should avoid a vaccination during the course of their treatment.

After getting a nod for treatment in moderate to severe cases of plaque psoriasis in adults who would otherwise need phototherapy or systemic therapy, experts suggest that the use of the drug among children could cause permanent damage to their immune system. An animal research that included mice equivalent to 1 to 14 year old humans showed that the drug could permanently suppress the immune system in children and hence it is not approved for use in children below 18 years of age.

Janet Woodcock, the FDA’s director of the Center for Drug Evaluation and Research, commented, “As part of FDA’s monitoring of the life cycle of approved products, the agency received reports of serious infections in some patients taking Raptiva. These reports led to our decision to highlight these risks in the drug’s labeling. Doctors and other prescribers should carefully evaluate and weigh the risk/benefit profile of Raptiva for patients who would be more susceptible to these risks.”

The boxed warning for Raptiva or efalizumab includes label notes that say that the drug can up the risks of conditions like bacterial sepsis, an infection of the bloodstream, viral meningitis which affects the brain and invasive fungal infections known to damage the lungs or other areas of the body along with a serious viral infection of the brain called progressive multifocal leukoencephalopathy (PML).

The warning has been issued in light of safety measures after an announcement by Genentech that revealed that the drug Raptiva could have caused a 70 year old chronic plaque psoriasis patient on Raptiva for four years to develop progressive multifocal leukoencephalopathy, or PML, which normally causes swelling of the brain and dying. The FDA also mentions that many others who had been taking Raptiva had to be hospitalized and may have even died due to these infections.

In addition to this, the FDA has patients to watch out for common symptoms of PML that include difficulty talking or walking, dizziness, and confusion or vision problems. Abnormal bruising or bleeding gums, dizziness or weakness, numbness or weakness in the arms, legs, or face; or worsening of psoriasis or arthritis are some other signals the FDA suggests patients need to keep a check on.

Experts at the FDA thus recommend doctors and health care professionals to keep an eye on patients who include Raptiva in their treatment. Patients are also advised to note any symptoms and signs and visit their doctor at the earliest.