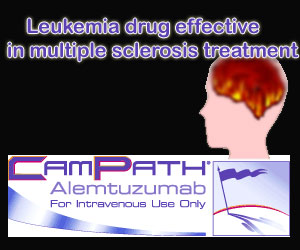 A novel study by researchers at the University of Cambridge unearthed some rather interesting results. The study suggests that a drug commonly used to treat leukemia called alemtuzumab could also help in the treatment of patients with multiple sclerosis (MS).

An original treatment drug for leukemia, Genzyme Corp has patent rights to the monoclonal antibody alemtuzumab drug. Clinical trials of the drug showed that it had the potential to turn over and in some cases even put an end to the crippling effects of MS. On the face of it alemtuzumab was found to repair damaged tissues in the brain, consequently reducing the disability of the patients.

It also lowered the number of attacks the MS patients suffered and gave them a greater ability to bring back their lost functions.

Study author, Lee Dunster, mentioned, “This is the first drug that has shown the potential to halt and even reverse the debilitating effects of MS and this news will rightly bring hope to people living with the condition day in, day out.”

Coordinating many aspects of the study, Dr Alasdair Coles, lecturer for department of clinical neurosciences at Cambridge University, further remarked, “The ability of an MS drug to promote brain repair is unprecedented. We are witnessing a drug which, if given early enough, might effectively stop the advancement of the disease and also restore lost function by promoting repair of the damaged brain tissue.”

In order to study the influence of the drug, researchers conducted clinical trails that involved nearly 334 patients diagnosed with early-stage relapsing-remitting MS. These individuals had never before been treated with alemtuzumab or interferon beta-1a. The mentioned drugs are one of the most effective licensed therapies for similar MS cases.

Funded in part by Genzyme Corp, the three year study discovered that patients had 74% lowered down the rack feeling as against other treatment methods. They also had reduced risks of sustained accumulation of disability by 71% over interferon beta-1a. The researchers mention the results are promising as the drug not only reduced the suffering of MS patients but also helped them get back some of their physical and intellectual functions. While disabilities in other patients who were off alemtuzumab saw a worsening in terms of their disability, the other patients showed improvement in their disability.

Affecting millions of people all over the globe with nearly 100,000 in Britain and 400,000 in the United States alone, MS is a type of auto-immune disease that has practically no cure and very few methods of effective treatment. Characterized by the body’s immune system attacking nerve fibres in the central nervous system, the debilitating condition can eventually lead to fatigue, cognitive problems, depression and loss of sight and movement.

The Phase II of the clinical trial reveals great potential for the drug to treat MS patients. Let’s hope this one has some good news for the millions affected by MS.

Findings of this medical breakthrough feature in The New England Journal of Medicine.