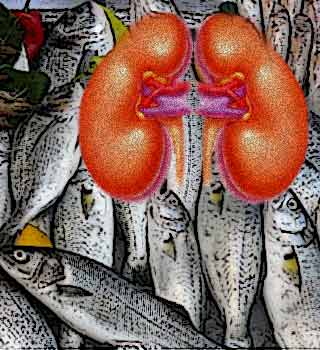 A study by researchers at the Medical Research Council epidemiology unit at Addenbrooke’s Hospital, Cambridge, recently revealed that individuals with diabetes should consume fish around twice a week to cut their risk of kidney diseases.

“Protein in the urine is one of the earliest signs of kidney disease,” remarked study co-author Dr. Amanda Adler, of the Medical Research Council epidemiology unit at Addenbrooke’s Hospital, Cambridge.

The research involved nearly 22,000 middle aged adults. Among these participants around 517 had diabetes, mainly type 2. The researchers followed closely the dietary and lifestyle habits of participants using a questionnaire. Next they were subjected urine examination

Interestingly the study showed that diabetics who ate less than one serving of fish per week had higher concentration of albuminuria, a protein in their urine about 18 percent while those who feasted on at least two servings of fish per week had a much lower concentration about 4%. Experts associated with the study believe a distinct nutrient composition of fish may be aiding kidney function. They claim it could be enhancing blood glucose control along with improving plasma lipid profiles.

Though researchers are not sure of the type of fish the volunteers consumed cod, plaice, haddock and canned tuna are among the few fish found in the region where the study was conducted. As for diabetes, the condition may prove fatal by causing serious damage to vital organs of the body especially the kidney.

The novel British research is published in the November issue of the journal American Journal of Kidney Diseases.