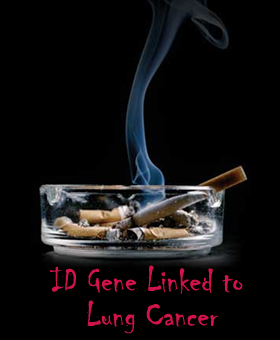 As part of a large, multi-institutional study, experts at John Hopkins have discovered one gene variant that is connected to a heightened danger of lung cancer.

For the study, the research team gathered DNA samples from 1,154 smokers who suffered from lung cancer and 1,137 smokers who were not hit by the disease. Each DNA was analyzed at over 300,000 points, seeking disparities, termed as single nucleotide polymorphisms or SNPs, between those affected by cancer and those without. After which the experts studied the top 10 SNPs in an additional 5,075 DNA samples from smokers with and without lung cancer.

Out of the 10 SNPs, 2 were constantly linked with lung cancer risk and both of them are located in chromosome 15 within an area that comprises of genes for the nicotine acetylcholine receptor alpha subunits 3 and 5, which already are suspected to be one of the causes behind lung cancer development.

Following this the researchers got doubtful if these genetic links relate to nicotine dependence, and discovered that the same two SNPs are also faintly associated with smoking behavior.

Kimberly Doheny, Ph.D., assistant director of the Center for Inherited Disease Research at the McKusick-Nathans Institute of Genetic Medicine at Johns Hopkins said, “The power of genome-wide analysis is to look at many markers and many samples at once, which can reveal weak genetic associations in complex diseases like lung cancer.”