Some studies reveal that women palms are a denser breeding ground for small microbes as compared to men! The researchers of the Colorado University, Boulder have online published a paper in the Proceedings of the National Academy of Sciences (PNAS) on the 3rd of Nov’08. Their study reveals that women’s hands are more bacteria friendly than men. 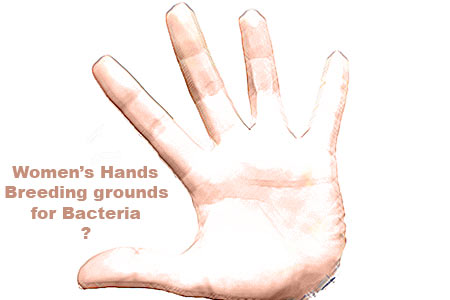 U.S. researchers took hand samples from a few college students, which revealed more than thousand types of bacteria’s, 5 out of which are commonly found on every hand, though the exact number of bacteria could not be detected. Men are said to have more acidic hands than women. Microbes flourish lesser in acidic environments.

In spite of washing their hands and maintaining hygiene more than men, women have more bacteria accumulation on their palms. The reason behind this being the use of cosmetics, creams etc. by women. Some reports state that, “Either the bacterial colonies rapidly re-establish after hand washing, or washing does not remove the majority of bacteria found on the skin surface.”

The lead author of PNAS and the assistant professor from the ecology and evolutionary biology department of Colorado University, Noah Fierer says: “The sheer number of bacteria species detected on the hands of the participants was a big surprise, and so was the greater diversity of bacteria we found on the hands of women. The vast majority of the bacteria we have on our body are either harmless or beneficial … the pathogens are a small minority.”

These studies will help in the better understanding of the different types of microbes residing on the human hand, due to different environmental and climatic conditions, different kind of labor work done, the amount of personal hygiene, the human hormone production, etc.

Co-author of PNAS and the chemistry and biochemistry Assistant Professor of the Colorado University, Rob Knight received a $1.1 million NIH grant, to make an in-depth analysis of these microbes using modern, updated and high profile instruments and computation tools. He says, “The vast majority of bacteria are non-pathogenic, and some bacteria even protect against the spread of pathogens. From a public health standpoint, regular hand washing has a very positive effect.”

A “metagenomic” survey was conducted, in order to identify the accumulated microbes on the human hand. In other words, microbial DNA was isolated and amplified, thus building complementary DNA strands with a high-powered sequencing machine. This method introduced different families, genres and species of bacteria’s.

Fierer states that, the palm bacteria are 3 times higher in quality as compared to the forearm or elbow, and in fact is even more bacteria-prone, so to speak, than the esophagus, mouth or lower intestine! He goes so far as saying that, “I view humans as ‘continents’ of microscopic ecological zones with the kind of diversity comparable to deep oceans or tropical jungles. Today we have the ability to answer large-scale questions about these complex microbial communities and their implications for human health that we weren’t even asking six months or a year ago.”

Knight says, “One thing that really is astonishing is the variability between individuals, and also between hands on the same individual.” Other than the amount of bacteria accumulated on male and female hands, these studies show that even a particular persons left and right hand’s microbe amount may vary! So much for the battle of the sexes!

The good news is that regular use of anti-bacterial soap is said to reduce the chances of bacteria formation on your palm. After reading this, we wonder how many can actually resist the temptation to go and wash away the faithful bacteria feeding off their palm.