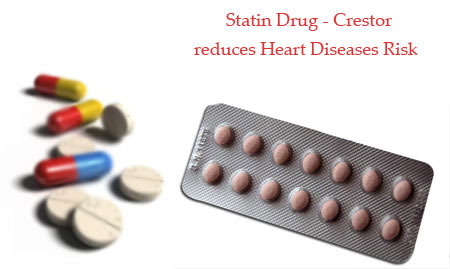 Daily treatment with Crestor, a new statin drug apparently reduced the rate of heart attacks and strokes by 44%, including people with normal levels of cholesterol. British experts believe that this study can keep fatal heart related problems in control. This cholesterol-lowering statin drug has become one of the most commonly prescribed medications in the world.
Around 18,000 middle aged men and women were studied for this trial. In spite of not having high cholesterol, the study subjects qualified for this research study called Jupiter, because it is believed that all these people had high levels of the protein, hsCRP – high sensitivity C-reactive protein, which was linked to an inflammation in the arteries. Jupiter stands for Justification for the Use of statins in primary Prevention: an Intervention Trial Evaluating Rosuvastatin.

Professor Peter Weissberg, the medical director at the British Heart Foundation said, “The Jupiter study is the first to show that rosuvastatin reduces heart attacks and saves lives, even in people whose cholesterol is not raised. It strongly supports the “lower is better” approach to cholesterol management. However, further studies are required to determine if measuring C-Reactive Protein is the right way to identify people likely to gain most from treatment.”

The statins block a critical enzyme (HMGCoA reductase) which is required for the manufacture of cholesterol in our bodies. Research has shown that statins can successively reduce the risk of heart attack and stroke in patients with high levels of the “bad cholesterol” or LDL. In other words, Crestor cuts the hsCRP levels and also halves the ‘bad’ cholesterol levels known as LDL in the patients. Other than benefiting people who don’t have high cholesterol, statin is said to benefit people with high LDL, as well.

A new study published in the New England Journal of Medicine, states that statin drugs supposedly lower the risk of fatal coronary artery diseases, heart attacks, and strokes in at least some normal LDL cholesterol level patients. Heart attacks were cut by 54%, strokes by 48% and the need for angioplasty by 46% among the group on Crestor compared to those taking the placebo pill. Those taking Crestor, also known as rosuvastatin, were actually 20% less likely to die from any cause. It is pointed out that almost half of all heart attacks and strokes occur in patients who have normal LDL cholesterol levels.

In this study, the subjects were randomly given either Crestor or a placebo. The results were so extraordinary that the trial was prematurely stopped halfway instead of the planned four-years, because it was considered unethical to keep giving placebos to half their patients. The accumulated data revealed that the Crestor patients experienced 55% and 48% reduction in heart attack and strokes risk respectively, when compared to the placebo receiving patients.

Dr Paul Ridker, lead researcher on the Jupiter study and the director of the Centre for Cardiovascular Disease Prevention at Brigham & Women’s Hospital in Boston, Massachusetts says, “Half of all heart attacks and strokes occur in men and women with normal cholesterol. We’ve been searching for ways to improve detection of risk in those patients. We can no longer assume that a patient with low cholesterol is a safe patient.”

Contrary to Jupiter teams belief, a recently released Danish study rules out C-reactive protein as a cause of heart attacks. To this the Jupiter team said that high hsCRP levels could indicate a greater chance that fatty plaques in the arteries could break off and cause stroke or heart attack in the patient.

This study has several unique and clinically important aspects: Unlike the previously published clinical studies looking at statins, the Jupiter study included large numbers of African-American and Hispanic women. The study confirmed that all of these groups benefited from the statin drug treatment. The other difference is that the volunteering patients had normal total cholesterol and LDL cholesterol levels in their blood. However, these patients suffered from abnormally high levels of C-reactive protein (CRP) in their blood.

Millions of Britons take statins daily to control their cholesterol. Around 80% of them opt for the cheaper alternative drug, simvastatin. This drug costs merely £1.42 a month, unlike AstraZaneca’s Crestor which costs £26 a month for just a 20mg dose. In spite of the price difference, experts strongly warn against trying to replicate the effects of Crestor by using higher doses of other statins. Crestor is the newest and the most effective statin.

Professor Martin Cowie, professor of cardiology at the National Heart and Lung Institute, Imperial College, London, says, “I sympathise with the need to consider costs but you have to balance risks and benefits amid this push to switch patients to generic drugs.” He states that GPs and cardiologists are under increasing pressure to prescribe alternative statins for patients in order to reduce their drug bill. Professor Cowie points out that it is obvious that not all statins work in the same manner. It could have an adverse effect on the patient, if they are given huge doses of other statins.

Some experts believe that statins may have other potential health benefits other than reduction of cardiovascular diseases. Although the information on statins as cancer prevention drugs has been conflicting so far, some studies have suggested that statins might reduce the risk of prostate cancer as well. From 1990 to 2006, more than 1200 male subjects aged 60, were given statin drugs for high LDL cholesterol. An eye was kept on them by the Durham, North Carolina, Veterans Affairs Medical Center. At the beginning as well as at the end of the research, all the subjects underwent blood prostate-specific antigen (PSA). None of the subjects had a history of prostate gland diseases.
After taking the statin drugs treatment, the LDL cholesterol levels decreased by approximately 28%. 17% reduction in blood PSA level was also observed.

Currently, the measurement of blood PSA levels is a crucial part of routine screening for prostate cancer. High levels of this particular protein generally indicate the need of prostate gland biopsy, in order to rule out prostate cancer. However the conclusion of this study reveals that a long time use of statins can supposedly hide the early signs of prostate cancer in men. Whether or not statin related lower PSA levels may be linked with lesser chances of developing prostate cancer or not, are not certain. A full fledged research in this field will have to take place in order to be certain of this fact. For now it is advised that men who have been using statin drugs over a long period of time with a history of prostate diseases should inform their doctors about this drug usage. A close eye should be kept on any signs or symptoms of prostate cancer. A low threshold to perform biopsies of the prostate gland should be considered.

Whether or not everyone is qualified for statin therapy is unclear at the time. It seems that another study like the Jupiter will have to be conducted to answer this question. Michael Miller, director of the Center for Preventive Cardiology at the University of Maryland Medical Center says that an individual’s CRP can vary over a period of time. Since it is a measure of any inflammation in the body, it can go up if the patient is suffering from a cold or an infection. He further says, “If somebody has a hemorrhoid their CRP will go up.” He stated that there are other ways to lower inflammation rather than immediately put someone on a statin. These include losing weight, exercising, quit smoking and eliminating trans-fats from the diet.

It should also be kept in mind that statins, like most drugs, have the chances of developing potentially serious side effects. In some patients, statin drugs have been linked with serious liver, muscle and kidney toxicity. It is recommended to follow any evidence of potential complications from statins in the patients.