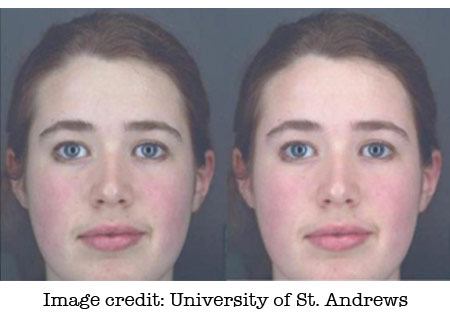 A team of researchers have stated that the color of a person’s skin may help other people in determining the health of that individual. They have further stated that a rosy skin may be considered healthier as compared to a pale skin. This interesting research was conducted by the University of St. Andrews.

It has been observed that many species among monkeys use the color of their face or the skin around their sexual area to publicize their physical condition and to attract the opposite sex. The researchers wanted to find out if human beings also possessed these similar tendencies.

The researchers were said to have started off their research by first measuring the difference in skin color according to the amount of oxygen in one’s blood. It was further stated that the research participants were then allowed to use these measurements with computer graphics to adjust the color in the photographs; in order to make the faces look as healthy as possible. It was then observed that the participants added more oxygen rich blood with the purpose of improving the face appearance in all the pictures.

Lead researcher, Ian Stephen, the Perception Lab, University of St. Andrews, says that “Parents and doctors know that when you get ill, you can end up looking pale. Our research goes further and shows that even young, healthy university students can benefit from a complexion reflecting more blood and more oxygen in the skin.”

Ian further states that our skin breathes because of the several minute blood vessels that the oxygen laden blood carries. The research states that people who smoke, are unfit, unhealthy and the elderly generally may not flush as easily as their healthy counterparts, due to the same reason. The researchers further continue that healthy people may tend to have more oxygen in their blood than those who are unhealthy or have heart or a lung illness.

Professor Dave Perrett, head of the Perception Lab commented that, “Our evaluators all thought that bright red blood with lots of oxygen looked healthier than darker, slightly bluer blood with lower oxygen levels. It is remarkable that people can see this subtle difference. This may explain why some people with very red faces do not look so healthy; the color of their blood may be wrong. So it’s not just the amount of blood that’s important it’s the type of blood that determines healthy looks.”

The researchers are said to have proved that more than the amount of blood, it is the type of blood that is more important. They have reasoned that keeping one’s heart and lungs healthy may automatically improve one’s appearance. Thus, this may be brought about by indulging oneself in exercises and avoiding smoking.

This research was published in PLoS ONE.