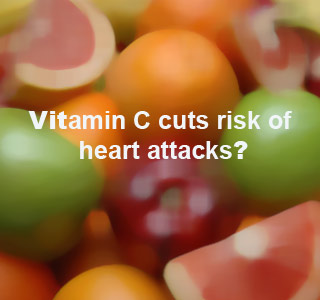 According to the study led by US researchers at University of California, Vitamin C supplements can reduce the concentration of C-reactive protein (CRP), biomarker of inflammation associated with heart disease and diabetes risk. The same research found that daily consumption of vitamin E is also not helpful.

The result was out after eight long years of research that involved 15000 male physicians at Boston’s Brigham and Women’s hospital in Boston, which failed to show that neither vitamin C nor vitamin E could lower the risk of heart attacks and strokes. According to the American Heart Association (AHA), defines that elevation in CRP is stated, as 1 milligram per liter or more, is an important difference in determining who can be benefited by the consumption of vitamin C.

Gladys Block PhD and professor of Epidemiology and Public Health Nutrition in University of California, Berkeley, said that according to her study for healthy, non smokers with high level of C-reactive protein and daily in-take of vitamin C lowered the levels of C-reactive protein after two months in comparison with those who took dummy pills. However the researchers agreed that more research work must be done as to see whether the vitamin C’s effect on CRP levels continues after two months also.

Gladys Block, said, “This is an important distinction; treatment with vitamin C is ineffective in persons whose levels of C-reactive protein are less than 1 milligram per liter, but very effective for those with higher levels.”

The researchers said further studies were called for to establish vitamin C’s beneficial effect on CRP levels beyond the two month span of the study. “This is clearly a line of research worth pursuing. It has recently been suggested by some researchers that people with elevated CRP should be put on statins as a preventive measure. For people who have elevated CRP but not elevated LDL cholesterol, our data suggest that vitamin C should be investigated as an alternative to statins, or as something to be used to delay the time when statin use becomes necessary,” says Block.

Though found that vitamin C does not seem to be beneficial to lower the risk of heart attacks or strokes but in general vitamin C is very beneficial. Vitamin C is very helpful for a healthy and glowing skin, scar tissues, tendons, ligaments, cartilage, bones and blood vessels. Deficiency in vitamin C leads to scurvy.

Many studies reveal that adequate consumption of vegetables and fruits like oranges, grapefruit etc that are rich in vitamin C can help to lower the risk of cancer of the pancreas, esophagus, larynx , mouth , stomach , colon ,rectum, breast, cervix and lungs.