A new research has unveiled a new technique to train the athlete’s brain in order to enhance their overall athletic performance. 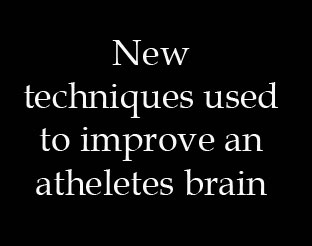 Professor Jocelyn Faubert and postdoctoral student David Tinjust, from the School of Optometry of the Université de Montréal are the lead researchers of this study. They conducted a number of object training exercises on a few soccer, hockey and tennis players. Thus resulting in an average of 53% increase in the athletes over all capability to grasp a lot of information and use it effectively.

In a particular exercise the athletes in the automatic virtual environment cave were asked to follow the movement of a series of balls moving around. The volunteers were asked to follow the balls movement and also mark the ones which changed their color immediately. Each training session lasted for an hour. After each session their results were noted down and a clear sign of improvement in the athletes’ performance was noticed. Faubert says, “It’s like physical training, but for the brain.” She continues, “In their normal workouts, athletes regularly evaluate their physical performance, but until now there has been no tool that could rate their cognitive performance. If an athlete feels both physically and mentally ready, that can only have a positive influence on his or her performance.” Other than physical capabilities, speed and efficiency in decision making are equally important for athletes.

This technique was originally meant only to test the reaction of elderly people and those who were slightly visually challenged, in a virtual setting. For instance, in what manner would the subjects figure out their way through traffic or crowd.

Later on the researchers changed their mind and used this technique as a training tool for athletes to better their performance. They decided to transfer their scientific knowledge to virtual training tools. The athletes can wear a virtual helmet for a mobile training session. They can opt for cybernetic gloves and glasses as well. While viewing superimposed images, the athletes can practice various complicated movements with a fictitious rival. All of these movements get recorded with the help of sensors.

This technique is already being used by ice hockey Olympic gold medalist Kim St. Pierre and the North American boxing champion Antonin Décarie among many others.