According to a new research, physical activity in addition to atleast seven hours of sleep reduces the risk of women acquiring cancer. 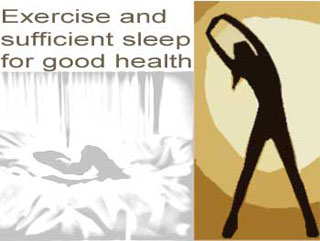 The researchers are still not certain as to how does exercise influence and curb the development of cancer. However they believe that it could be due to an increased immunity, body weight and hormone levels. These researchers also studied the effects of sleep on potential cancer risk.

James McClain, Ph.D., cancer prevention fellow at the National Cancer Institute and also the lead author of this study states that, “Greater participation in physical activity has consistently been associated with reduced risk of cancer incidence at several sites, including breast and colon cancers. Short duration sleep appears to have opposing effects of physical activity on several key hormonal and metabolic parameters, which is why we looked at how it affected the exercise/cancer risk relationship.”

The researchers studied around 6000 eighteen year old women with no previous history of cancer. These women were kept an eye on for about a decade. The researchers evaluated the link between physical activity energy expenditure (PAEE), sleep duration and prior incidence of cancer in these women.

Of these women, 604 were diagnosed with first incidence of cancer, including breast cancer. 50% of the women in the PAEE showed a lower risk of acquiring any type of cancer. Among the more active women 65 or younger, sleeping for less than seven hours a night wiped out exercise benefits and affected their over all immunity against cancer. McClain says, “Current findings suggest that sleep duration modifies the relationship between physical activity and all-site cancer risk among young and middle-aged women.” He continues, “Overall cancer risk among younger women is relatively modest. It’s not a highly likely event by any means.”

According to McClain, the next step would be to analyze this situation properly in order to better understand the effects and the link between exercise and sleep on the prevention of cancer. A number of studies have been conducted on the effects of insufficient sleep on the over all well being of human beings, however few studies have linked less sleep with an increased cancer risk.

It is recommended to be active and get sufficient sleep in order to increase the rate of mortality. It is also said that just by sleeping, there won’t be any reduction in cancer risk, exercising is very essential as well.

This study was presented at the American Association for Cancer Research’s Seventh Annual International Conference on Frontiers in Cancer Prevention Research.