Scientists have found a connection between two proteins in the brain that is linked to both nicotine addiction and autism. It is believed that existing drugs used to control nicotine addiction may form the base for potential therapies to lessen autism symptoms. 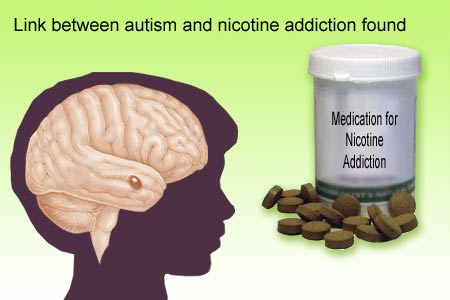 They discovered a protein made by the neurexin-1 gene. The neurexin-1 gene is located in the brain cells and helps in connecting neurons as a part of the brain’s chemical communication system. The aim of this protein is to attract another protein, a specific type of nicotine acetylcholine receptor, to the synapses. Here the role of the receptor includes helping the neurons communicate signals among themselves and also to the rest of the body.

Rene Anand, associate professor of pharmacology in Ohio State University’s College of Medicine and principal investigator of the research says that, “If we were to use drugs that mimic the actions of nicotine at an early time in human brain development, would we begin to help those and other circuits develop properly and thus significantly mitigate the deficits in autism? This is a novel way of thinking about how we might be able to use drugs to approach autism treatment. It would not be a complete cure, but right now we know very little and have no drugs that tackle the primary causes of autism.” These drugs are known as cholinergic agents. They get together with the brain to oppose nicotine addiction.

According to Anand, these drugs can be modified for use in children, in order to increase the level of neurexin-1 beta protein in the brain of the people with autism. With the increase of this protein, not only the presence of nicotinic acetylcholine receptors but also a number of other proteins that are needed for the proper formation maturation of synapses, get better. For the nervous system to connect with and control other systems of the body, proper synapse function is very essential.

He further says, “Now that these associations have been made, we believe that nicotine in smokers’ brains possibly increases the level of neurexin-1 and, as a consequence, helps bring more receptors to the synapses and makes those circuits highly efficient, reinforcing the addiction. In autism, we have the opposite problem. We have a lack of these receptors, and we speculate that neurexin levels are lower.”

According to previous research, people with autism have a shortage of these nicotinic receptors in their brain, thus this function is very important in autism. On the other hand, people addicted to nicotine have these receptors in large numbers in their brains. Anand says, “These have all been ‘association studies’. None has been able to prove what causes autism. And then we accidentally discovered that neurexin-1 and nicotinic receptors tangle. So we knew that there was a genetic link to the process leading to synapse formation, and we had nicotinic receptors that had disappeared in the brains of autistic patients. Our finding filled a gap by saying there is a physical and functional association between these two things occurring in the brain.” He also says that people with an alteration in the neurexin-1 gene were more prone to smoking or an addiction to tobacco.

This research was presented at the Society for Neuroscience meeting in Washington D.C.

Can bipolar disorder be outgrown by young adults?