Just as winter is commonly called the “flu season”, summer is now being called the “bacterial infection” season according to a new study. 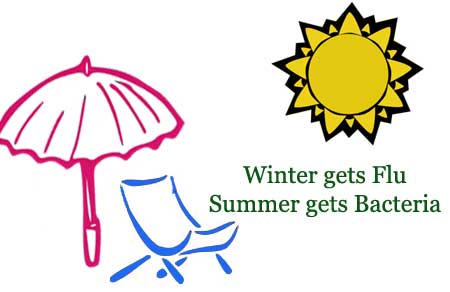 Serious infections are caused by gram-negative bacteria. Researchers have revealed that, these infections can increase by 17 percent, with every 10 degree increase in the seasonal temperature. The cause of this is not yet known.

This study is based on the researchers findings accumulated over a period of 7 years, from the infections in a Baltimore hospital. This data suggests that the rate of developing illnesses is higher in summer than in winter by 46 percent.

Jessina McGregor, an assistant professor in the College of Pharmacy at Oregon Sate University says that, “Gram-negative bacteria are a frequent cause of urinary tract, gastrointestinal and respiratory infections, as well as more serious things like pneumonia, wound or blood infections. Everyone knows there is a seasonality to some viral infections such as influenza or the common cold, but we’re now finding that some of these bacterial infections peak in the heat of summer.”

The study analyzed infections caused by these gram-negative bacteria, including E. coli, Pseudomonas aeruginosa, E. cloacae, and Acinetobacter baumannii. The greatest increases in infection caused due to high temperatures were stated to be with P. aeruginosa. This is a common cause of urinary tract, burn, external ear and lung infections. And also with A. baumannii, which is considered to be opportunistic pathogen that is fatal and can seriously cause illnesses, particularly in people with low immune systems.

McGregor says that, “Bacterial infections in general have been rising for some time, probably due at least in part to increased antibiotic resistance. The more we can learn about what is causing them and when they are most likely to occur, the better we can treat or prevent them.”

It is stated that there are a number of causal factors responsible for the increase in these bacterial infections during summertime. However none of these causes are proven yet, according to the researchers. For instance, P. aeruginosa is an aquatic organism, and thus the infections caused by it could have being associated with people who must have picked it up while swimming in lakes or pools during summer time. It is also stated that these gram-negative bacteria cause urinary tract infections. Presently, the risk factor for this is said to be through sexual intercourse, which increases due to more sunlight during summer time.

The researchers concluded that, “Regardless of the mechanisms responsible for infections, recognition of the link between the physical environment and the incidences of pathogenic infection could aid in infection prevention interventions or the selection of optimal empirical antimicrobial therapy.”

The discovery of the cause of these illnesses will aid in better understanding of the disease, and diagnosing and treating it. And also better preventive measures can be taken to curb the on set of the infections in the first place itself.

The research team included scientists from OSU; Dr. Eli N. Perencevich, who is an associate professor of epidemiology and preventive medicine at the University of Maryland School of Medicine; and also researchers from the University of Florida and the Research Institute of the Hospital for Sick Children in Toronto.

These findings are published in the professional journal, Infection Control and Hospital Epidemiology.