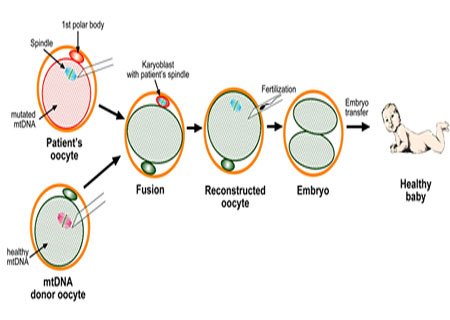 Science and medicine has advanced a lot in these past few years. More and more treatments seem to have been discovered for complex diseases. Well the latest discovery by researchers at the Oregon Health & Science University’s Oregon National Primate Research Center (ONPRC) claim the development of one of the first forms of genetic therapy which apparently aims at preventing critical diseases in unborn children.

Apparently it is said that the therapy would fight hereditary diseases that pass on from mothers to their children through mutated DNA in cell mitochondria.

Shoukhrat Mitalipov, Ph.D., an associate scientist in the Division of Reproductive Sciences at ONPRC, the Oregon Stem Cell Center and the departments of Obstetrics and Gynecology and Molecular & Medical Genetics of Oregon Health & Science University (OHSU) commented “We believe this discovery in nonhuman primates can rapidly be translated into human therapies aimed at preventing inherited disorders passed from mothers to their children through the mitochondrial DNA, such as certain forms of cancer, diabetes, infertility, myopathies and neurodegenerative diseases.”

Mitochondria are often known as the cell’s ‘power plant’ as they are structures that are in all cells that supply energy for cell growth and metabolism. To power each individual cell, the structures produce energy. Their own genetic material is apparently carried on by mitochondrial.

The embryo almost solely inherits the maternal mitochondria present in the egg when it is fertilized by a sperm cell during reproduction. This means that the disease gets passed on to the offspring by the mother who carries any disease-causing mutations in her mitochondrial DNA. To prevent the disease to be passed onto the offspring from the mother, the method developed by OHSU researchers transports the mother’s chromosomes to a donated egg. The chromosomes of the egg are removed but it has healthy mitichondria.

The birth of two healthy twin monkeys nicknamed ‘Mito’ and ‘Tracker’ was the result of the initial implantation of the two embryos. These nicknames were in reference to the procedure which was used for imaging of mitochondria. These monkeys are claimed to be the world’s first animals which are created by spindle transfer.

Mitalipov commented “In theory, this research has demonstrated that it is possible to use this therapy in mothers carrying mitochondrial DNA diseases so that we can prevent those diseases from being passed on to their offspring. We believe that with the proper governmental approvals, our work can rapidly be translated into clinical trials for humans, and, eventually, approved therapies.

Dr. Joe Robertson, M.D., M.B.A., president of OHSU added that this breakthrough is an excellent example of how OHSU’s research findings can often be rapidly translated into health therapies that benefit residents of our state and the country as a whole.

This research was published in the August issue of the journal Nature.