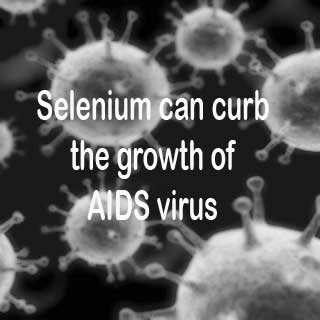 According to some biochemists, by increasing the production of naturally occurring proteins, containing selenium, in the human blood cells, apparently slows down the multiplication of AIDS virus.

Selenium is a micronutrient. The body needs it to maintain its normal metabolism. Selenium gets integrated with the proteins in the form of an amino acid, selenocysteine. On the other hand, the other nutrients hook on to certain proteins and modulate the protein’s activity.

K. Sandeep Prabhu, Penn State assistant professor of immunology and molecular toxicology, says that, “We have found that increasing the expression of proteins that contain selenium negatively affects the replication of HIV. Our results suggest a reduction in viral replication by at least 10-fold.”

The selenoproteins are essential in reducing stress caused by infections, thus slowing its spread. Once a person gets infected, the virus in order to easily multiply immediately attacks the selenoproteins. The reason behind this is still unknown. However Prabhu and his coworkers assume that a protein, Tat, produced as a result of the virus’ stress inflicted on the cells, is the responsible factor.

It is stated that Tat is one of 14 proteins produced by HIV during its initial stage of infection. Their main aim is to activate the expression of the other genes that is required by the virus to nourish itself. Tat is also a part of this procedure. It is said that the selenoprotein, TR1, is one of the proteins that aims Tat.

Prabhu says that, “Since HIV targets the selenoproteins, we thought that the logical way to deal with the virus is to increase the expression of such proteins in the body.”

For the tests, the researchers first separated the blood cells from the healthy participants not suffering from HIV, and infected those healthy cells with the virus. After that, they added a little of the selenium compound, sodium selenite, in the cell structure. This was done to witness its effect on the viral replication. It revealed that the addition of sodium selenite on an average curbs the growth of HIV almost 10 times, as compared to cell structures without this selenium compound. On reducing the production of the selenium pertaining TR1 protein, 3.5 times rise in viral replication was noticed. Prabhu assumes that the chemical structure of Tat is shaken up by TR1. Thus this leads to the virus’ vulnerability to multiply or replicate.

Their findings are published in the Journal of Biological Chemistry.