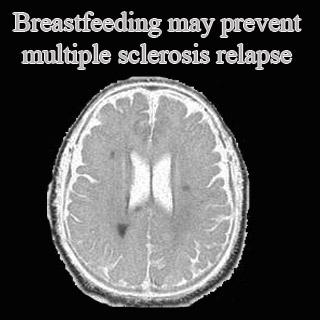 For the purpose of the study, the researchers kept a check on about 61 pregnant women during each trimester and up to a year after they gave birth. Out of these women, 32 suffered from multiple sclerosis, while 29 did not suffer from this disease. It was noticed that about 87 percent of the women suffering from multiple sclerosis who did not breast feed, suffered from a relapse. By contrast only about 36 percent of women suffering from this disease, who breast fed, experienced a relapse.

Study author, Annette Langer-Gould, MD, PhD, of Stanford University in California, says that, “Our findings call into question the benefit of choosing not to breastfeed or stopping breastfeeding early in order to start taking MS therapies. Larger studies need to be done on whether women should delay taking MS medications in order to breastfeed.”

More than half of these women reported the reason for not breastfeeding exclusively was to re-start taking multiple sclerosis treatments. It was found that those women who re-started taking their medications early after child birth suffered a higher risk of relapse as compared to the others who didn’t. This was irrespective of whether they breastfed or not.

It is also said that a more detailed analysis needs to be conducted before they can finalize their study findings.

Their findings will soon be presented at the American Academy of Neurology’s 61st Annual Meeting in Seattle.