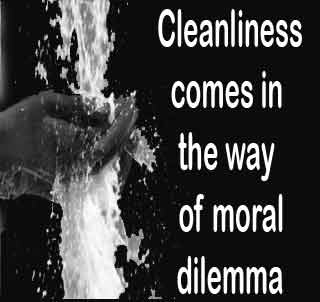 The research consisted of two experiments that were conducted on university students. The first experiment involved the students to finish scrambled sentences. This involved 40 sets of sentences of four words each. Underlining any three words would form a sentence.

Simone Schnall, the lead researcher said that, “When we exercise moral judgment, we believe we are making a conscious, rational decision, but this research shows that we are subconsciously influenced by how clean or ‘pure’ we feel. Take for example the situation of a jury member or voting in an election – if the jury member had washes their hands prior to delivering their verdict, they may judge the crime less harshly. Similarly, someone may find it easier to overlook a political misdemeanor had they performed an action that made them feel ‘clean’ prior to casting their vote.”

The results achieved from the experiments prove that somehow people, who felt clean, were lenient when passing a judgment, as compared to the other participants.