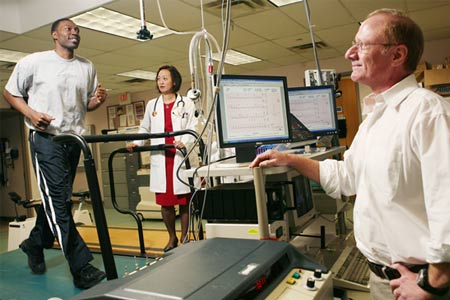 Former professional football players with large bodies don’t seem to have the similar threat aspects for heart disease as compared to their non-athletic counterparts. This was claimed by a study from UT Southwestern Medical Center who examined a group of National Football League (NFL) alumni.

Retired NFL players apparently had a considerably lesser frequency of diabetes, hypertension, sedentary lifestyles and metabolic syndrome as opposed to other men in a similar age range.

Dr. Alice Chang, assistant professor of internal medicine at UT Southwestern and the study’s lead author, commented, “Despite their large body size, retired NFL players do not have a greater prevalence of heart disease risk factors when compared to the general population. In fact, other factors such as age and high cholesterol levels were better predictors for heart disease than the body size of the former athletes in our study.”

As per the standards of body mass index (BMI), apparently more than half of all professional football players are thought to be overweight or obese, which could be a sign for heart disease risk. Dr. Chang is of the opinion that even though most of these players are not as robust and active post retirement, they still did not have much of a risk for heart disease as compared to men of similar age and body size.

Dr. Benjamin Levine, senior author of the study, a professor of internal medicine at UT Southwestern, and director of the Institute for Exercise and Environmental Medicine is of the opinion that staying physically fit earlier in life might have counterbalanced the risks linked with a huge body size.

About 150 previous pro athletes and 150 normal equivalents were analyzed for the study. Their mean age was said to be 55. The center BMI for both groups was seen as more than 31, which is apparently measured to be in the obese range.

Nevertheless, a totally clean chit of health was not given to the NFL players. Similar to the group of non-athletes, they were also found to have developed identical quantities of coronary atherosclerosis i.e. hardening of the arteries. Even though they were less expected to have diabetes, they supposedly had higher rates of pre-diabetes, high fasting blood-sugar figures that may amplify their possibility for developing diabetes in later.

Dr. Chang believes that professional athletes ought to carry on exercising even after their professional careers are over. For the public at large, one must exercise regularly as it could be an imperative way to reduce the possibility of heart disease.

The finding appears in the American Journal of Cardiology.