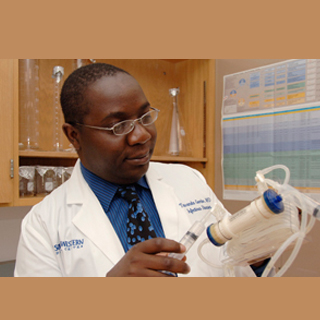 Tuberculosis is said to be a general and often fatal infectious disease caused by mycobacteria, typically Mycobacterium tuberculosis in humans. Tuberculosis is believed to generally assault the lungs but could also affect other parts of the body. Two new tuberculosis studies by UT Southwestern Medical Center scientists are all set to deliver good news and bad news about the bacterium that contaminates almost a third of the world’s population and a disease that kills around 2 million people every year.

The good news is that a kind of blood pressure medication seems to display potential in combating some drug-resistant tuberculosis, at least in the laboratory. The bad news is that the Mycobacterium tuberculosis bacterium, which appears to cause the disease, could be resistant to treatment in more people than formerly believed.

Dr. Tawanda Gumbo, associate professor of internal medicine at UT Southwestern and senior author of the studies and colleagues utilized an experimental apparatus to replicate the way TB bacteria breed in the human lung. When they apparently uncovered the bacteria to drugs generally used to treat the disease namely ethambutol and isoniazid, the bacterial cells triggered a cellular mechanism that appears to force each drug out of the cells. The pumping action could facilitate the hasty appearance of high-level resistance to the drugs whether administered together as well as separately.

Dr. Gumbo mentioned, “We treat TB with multiple drugs essentially to protect each other from resistance, but yet we’ve been puzzled with why you find resistance to both drugs together. Our findings make sense – it is more efficient from the bacteria’s viewpoint to employ the same mechanism get rid of multiple attackers, whether they strike alone or at the same time.”

Resistance appears to be radically decreased. Nevertheless, when the study authors delivered the blood-pressure drug reserpine to the TB cells prior to administering ethambutol and isoniazid. Resprine is known to obstruct this pumping action.

Current TB treatment utilizes numerous drugs concurrently, in attempting to avert drug resistance. The subsequent step could be to examine all the first-line drug treatments jointly with the pump blocker in humans. If first-line drugs are not successful in destroying TB, the person may have multidrug-resistant TB. Doctors then progress to second-line treatments, which are generally more costly and more toxic and take longer to work.

In Dr. Gumbo’s second study, the experts discovered that more people might have drug-resistant TB than presently thought since tests that seem to examine the TB bacteria’s resistance do not appear to account for variations in height, weight and other aspects among TB patients.

Guidelines for examining whether a person is suffering from a drug-resistant TB strain were said to be crafted over 40 years ago. They include finding out the least concentration of a drug that may destroy at least 95 percent of the TB bacteria in a patient. The TB is thought to be resistant to the drug if more than 1 percent of TB still develops at that concentration. Dr. Gumbo mentioned those guidelines are claimed to be helpful for exhibiting trends, but do not seem to be effectual for envisaging how a person could react to therapy.

In the second study, he once again replicated TB in the human lung and virtually duplicated eight clinical trials including 10,000 patients. The computer simulation appears to have factored in pharmacokinetics to verify how likely a dose of a given drug is to destroy TB. Dr. Gumbo’s study team discovered that the concentrations generally used in practice are believed to be too low, leading people to believe they have treatable TB, when in fact their disease could be resistant to general drugs.

The first study would be published in The Journal of Infectious Diseases. The second study appears in Antimicrobial Agents and Chemotherapy.