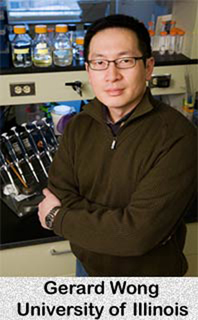 University of Illinois and the University of Massachusetts, Amherst researchers have evidently unveiled a method to trick a bacteria’s evolutionary machinery into programming its own death.

The researchers reveal a synthetic “hole punching” antimicrobial that relies on the presence of phosphoethanolamine (PE). PE is apparently a cone-shaped lipid, which is found in the Gram-negative bacterial membranes, in a high concentration. It’s stated that the PE lipids are instructed to fight against the bacteria; however, evidently in the absence of the lipids, the bacteria would also die.

Paper’s corresponding author, Gerard Wong, a professor of materials science and engineering, of physics, and of bio-engineering at the University of Illinois, says that, “The basic idea is for an antimicrobial to target something in a bacteria that, in order to gain immunity, would require the bacteria to kill itself through a suicide mutation.”

Wong further says, “It’s a Catch-22. Some mutations bacteria can tolerate, and some mutations they cannot tolerate. In this case, the bacteria would have to go through a mutation that would kill it, in order to be immune to these antimicrobials.”

The researchers supposedly studied the survival of the Escherichia coli bacterium in comparison to a mutant strain of E. coli, which evidently lacks PE lipids in its membrane. It’s stated that E. coli survived longer than the healthy bacteria when faced with a “hole-punching” synthetic antibiotic. The exact opposite took place when exposed to tobramycin, a conventional metabolic antibiotic that, rather than the membrane, aims the bacterial ribosomal machinery.

Wong says that, “The antimicrobial re-organizes PE lipids into holes in the membrane. The perforated membranes leak, and the bacteria die.” He further says that there is an increasing need for the discovery of new techniques and methods to treat emerging pathogens that seem to be immune to the best antibiotics as well.

After the understanding of the way molecular “hole-punching” functions, researchers hope to come up with new ways to produce antimicrobials that the bacteria do not seem to be immune to.

Their findings have been accepted for publication in the Proceedings of the National Academy of Sciences. The paper is believed to be posted this week on the journal’s website.