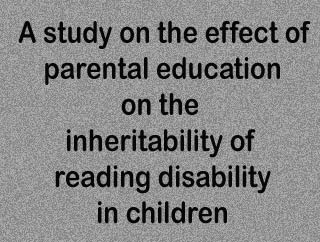 A child’s educational and socio-economic environment is believed to depend mostly on its parent’s education. Occasionally, in spite of having highly educated parents and good educational support, some children face reading difficulties.

This study was conducted by psychologists at the University of Colorado, Boulder. The psychologists studied around more than 500 pairs of identical and fraternal twins. The educational levels of the twin’s parents were also observed. In these twins, apparently in each pair at least one of the twins had reading disability.

Apparently, The No Child Left Behind Act of 2001 expects all the children, by 2014, to reach the “grade level” performance on reading and other academic skills. They evidently presume that this function will be performed with the aid of suitable education. It’s stated that this study may prove to be beneficial for future genetic research as well as national educational policies.

The study authors recommend that a better policy that would take into consideration the genetic hurdles of the reading disable children to accomplish the “grade level” performance. Also that, this new policy should appreciate the functionally critical progress the reading disable children make, in reading as well as other academic skills, even if they fail to reach the desired grade level.

Congo Fever: Simple Precautions for an obscure but dangerous disease

Breastlight may be able to caution against breast diseases