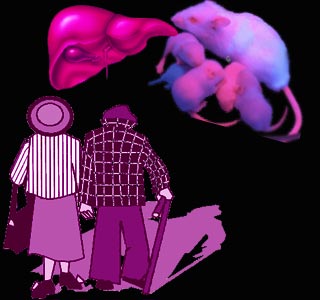 Scientists at Yeshiva University have been successful in preventing age-related decline in an entire organ like the liver for example. This shows that the organs of older animals functioned as efficiently as younger animals. As it is widely known, the ability of cells to get rid of damaged protein retards with age. This further causes it to accumulate in the body as a toxin and becomes more pronounced with Alzheimer’s and Parkinson’s disease.

Ana Maria Cuervo, co-author of the study, associate professor in the departments of developmental & molecular biology, medicine and anatomy & structural biology of Yeshiva’s Albert Einstein College commented, “These findings suggest that therapies for boosting protein clearance might help stave off some of the decline that accompanies old age.”

Various surveillance systems are designed in the cells of all organisms to find, digest and recycle damaged proteins. Innumerable studies have revealed that age makes these processes less efficient and protein is gradually accumulated inside the cells. However, a bone of contention is whether the contribution of this protein build-up causes the functional losses of ageing or is a mere association to these losses.

Aiming to resolve this controversy, the Einstein College study found that molecules called chaperones look for damaged protein. These are responsible for handling 30 percent or more of damaged cellular protein in one of the surveillance systems. On finding such a protein, the chaperone ferries it towards one of the cell’s many membrane-bound sacs filled with enzymes namely lysosomes. The damaged protein is then drawn into the lysosome and rapidly digested by its enzymes when the chaperone and its cargo “dock” on a receptor molecule on the lysosome’s surface.

The study was conducted with a transgenic mouse model equipped with an extra gene – one that codes for the receptor that normally declines in number with increasing age. It was created by Cuervo. By simply changing the animal’s diet, another genetic manipulation was possible which allowed Cuervo at a time of her choosing to turn on this extra gene only in the liver. Before turning on the added receptor gene, Cuervo waited till the mice were six months. This kept the level of the receptor constant throughout life. At six months, the chaperone system’s efficiency begins to decline.

The mice were analyzed when they were nearly 22 to 26 months of age as this age was an approximate equivalent of 80 year old humans. The examination revealed that as against normal counterparts of the same age, transgeneric mice digested and recycled protein far more efficiently. It was just as efficient as in normal six-month old mice.

Along with Alzheimer’s, Parkinson’s, other neurodegenerative brain diseases are next on Cuervo’s list of study. She plans to find whether they can be treated by maintaining efficient protein clearance in the brain.

The study is published in the online edition of Nature Medicine.