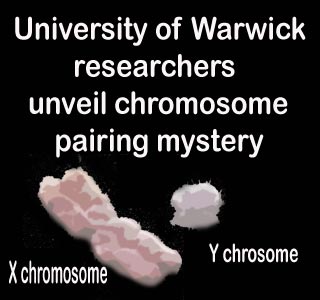 A latest University of Warwick research reveals that they have evidently identified the trigger that clusters together the X chromosomes in female cells at an important embryo development stage. Apparently, this is an important discovery because it’s stated that the procedure of clasping too many or too few chromosomes may be the causal factor for conditions like Down’s Syndrome or Turner’s Syndrome.

Seemingly, this latest discovery may even prove to provide additional knowledge to better understand how other similar chromosomes spontaneously identify each other and are apparently also bound together in similar cell processes.

Evidently it’s stated that most genes, in cells, are expressed from both types of each chromosome linked gene. However, apparently the X-linked genes in female mammals are an exception to this norm. It’s evidently stated that during embryo development, one of the X chromosomes is over-powered in each female cell to make sure that the levels of X-derived products are equalized in XX females and XY males through the X-Chromosome Inactivation process. Apparently for this process, the X chromosomes have to immediately colocalize and permit each part of the X chromosome pairs to get close and aligned to each other. Its failure to do so may result in XCI failure and cell death.

Earlier researchers evidently were clueless as to how the particular chromosomes get together and proceed from there. Dr. Mario Nicodemi, Department of Physics, University of Warwick; and Dr. Antonio Scialdone, University of Naples, have seemingly provided answers to this mystery. It’s stated that this procedure was not clearly understood, until now.

Chromosome colocalization events are seemingly said to be very common in cells. It can apparently be noticed in meiosis, sexual reproduction to succeed in producing viable cells. Evidently in the process, all of the homologous chromosomes have to simultaneously couple up with each other.

The researchers state that their new discovery gives an insight to how X chromosomes couple during meiosis. Other than this, they believe their discovery may be helpful in other cell processes as well.

Their findings have been published in the PLOS.