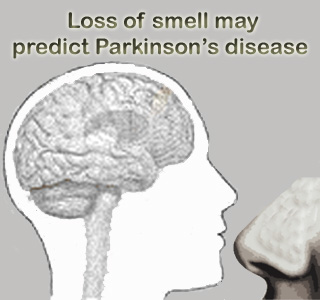 It is stated that Parkinson’s disease patients lose their sense of smell prior to the onset of other symptoms like speech problems, impaired dexterity, tremors, memory loss and decreased cognitive ability. A new study was conducted in an attempt to evaluate if a loss of sense of smell is an early predictor of Parkinson’s and if it could possibly help in preventing or delaying the onset of graver symptoms.

The researchers of Northwestern Memorial Hospital and Northwestern University’s Feinberg School of Medicine became a part of the national study conducted on this criterion. Northwestern is the only center in Illinois to participate in the Parkinson’s Associated Risk Study (PARS), which is said to be the largest long-term U.S. study on the relatives of Parkinson’s disease patients.

Tanya Simuni, MD, director of Northwestern’s Parkinson’s Disease and Movement Disorders Center, says that, “Very little is known about the early stages of this disease. By utilizing smell testing in conjunction with other tests, we hope to develop a system that identifies the presence of Parkinson’s before it develops into problematic symptoms.”

An analysis of around 7,500 relatives of Parkinson’s disease patients is been conducted by PARS. They state that first-degree relatives of these patient’s have a slightly higher chance of acquiring this disease, as compared to others. PARS has evaluated only older relatives for this study, since the development of this disease is mainly influenced with increasing age.

Simuni says that this study may prove to provide additional knowledge about the initial stages of Parkinson’s disease, and may prove to be beneficial for the next generation. Simuni hopes that in future, early detection and diagnosis of the disease, plus neuro-protective therapy may aid in reducing the speed with which the disease grows or maybe even prevent any further growth of the disease in an individual.