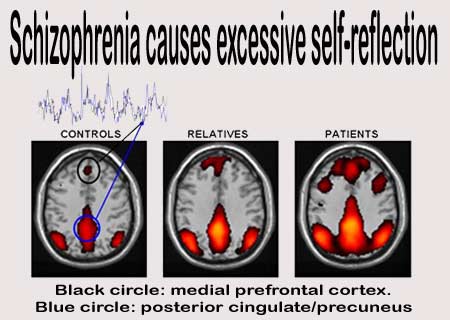 A new study states that schizophrenia boosts activity in certain part of the brain that deals with self-reflection, thus resulting in an overstressed self-centeredness. This disorder is believed to probably smudge the distinction between internal and external realities. This innovative study was conducted by Massachusetts Institute of Technology (MIT) and Harvard Medical School.

Schizophrenia or unstable thoughts and emotions are believed to be caused due to the disconnection in the brain region that regulates these functions. This latest study has added to their knowledge of this disease. They state that this disease also causes an excessive connectivity in those parts of the brain, which are engaged in self-reflection. This part of the brain is believed to be triggered when an individual perceives himself in particular or nothing in general.

“People normally suppress this default system when they perform challenging tasks, but we found that patients with schizophrenia don’t do this. We think this could help to explain the cognitive and psychological symptoms of schizophrenia,” says Study co-author, John D. Gabrieli, a professor in the McGovern Institute, Brain Research, MIT.

It is stated that schizophrenia is a genetic disease, and these patient’s first-degree relatives stand an increased 10 fold risk of developing this disease as compared to the general population. The study investigators examined three carefully matched groups of 13 subjects each; schizophrenia patients’, patients’ non-psychotic first-degree relatives, and healthy controls. All the study participants were scanned while undergoing simple or complex memory tasks, through functional magnetic resonance imaging (fMRI).

First author, Whitfield-Gabrieli, a research scientist at MIT Martinos Imaging Center, McGovern Institute says that, “We think this may reflect an inability of people with schizophrenia to direct mental resources away from internal thoughts and feelings and toward the external world in order to perform difficult tasks.”

The investigators mainly focused on the default system, a network of brain regions where its activity is restricted while undergoing complex mental tasks. This network is said to be involved in self reflection and autobiographical memories. The study results revealed that the default systems in the schizophrenic patients were both hyperactive and hyper-connected during rest as well as during their performance of memory tasks as well.

The default system is believed to be hyperactive, though relatively lesser, in the healthy first-degree relatives of schizophrenia patients. This hints that the default system’s over-activation may be associated with the genetic cause of the disease, rather than its consequences.

Their findings are published online in Proceedings of the National Academy of Sciences.