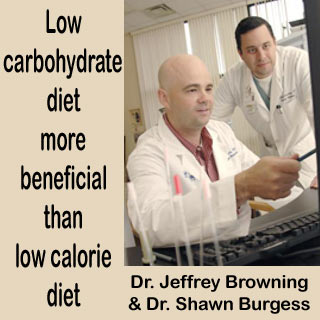 Low-carbohydrate diet followers, for energy rely more on the oxidation of fat in the liver, as compared to the low-calorie diet followers. This revelation was done by a University of Texas Southwestern Medical Center study.

Lead author, Dr. Jeffrey Browning, assistant professor in the UT Southwestern Advanced Imaging Research Center, says that these findings may be helpful in treating obesity, diabetes, insulin resistance and even non-alcoholic fatty liver disease. He says, “Instead of looking at drugs to combat obesity and the diseases that stem from it, maybe optimizing diet can not only manage and treat these diseases, but also prevent them.”

Around 14 overweight adult subjects were randomly assigned to either a low-calorie diet group or a low-carbohydrate diet group. 7 lean subjects on a regular diet were also monitored for this study. The investigators monitored these subjects with the aim of determining how diet affects glucose production and utilization in the liver. The subjects had to undergo an advanced imaging technique after a period of two weeks. About this, Dr. Browning says that, “We saw a dramatic change in where and how the liver was producing glucose, depending on diet.”

It was noticed that the subjects on a low-carbohydrate diet yielded a higher level of glucose from lactate, as compared to the low-calorie dieters. Dr. Browning says that the understanding of the liver’s process of producing glucose based on a person’s varying diet, may aid in better understanding of metabolic disorders with diet.

The study results are considered crucial because they state that the build up of excessive amount of fat in the liver could further lead to non-alcoholic liver disease. This disease is believed to be linked to metabolic disorders like diabetes, insulin resistance, obesity, liver inflammation, and maybe even liver cancer.

Their study findings are published in the Hepatology journal.