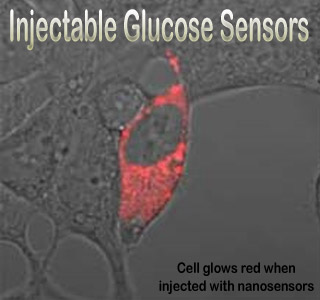 Draper Laboratory, Cambridge, MA, scientists are in the midst of developing an inject-able nano-sensor that may have the ability to keep an eye on a person’s blood-sugar level. This nano-sensor, very similar to a tattoo dye, can be injected under the diabetic individual’s skin. The nano-sensor is believed to have the capability to fluoresce when placed under an infrared light. Thus, informing the diabetic individual if an insulin shot, preceded by a meal, is required.

In an attempt to rid diabetics from the various troublesome techniques adopted in order to measure their blood sugar level, a variety of innovative techniques are being developed. These techniques vary from implanted devices to non-invasive sensors. Heather Clark and colleagues from the Draper Laboratory are trying to develop a device that operates in between the two above mentioned devices. The researchers state that they have verified a sodium-sensing version of the device in mice. Animal tests of the glucose-specific sensor are soon believed to commence.

This particular device contains around 120-nanometer polymer beads that are foiled with a biocompatible material. Each individual bead contains a fluorescent dye and specialized sensor molecules, which are particularly designed in such a way so that they recognize the presence of certain chemicals like glucose or sodium.

On being injected in the skin, these sensor molecules attract the specified chemical from the interstitial fluid, in the polymer. In order to balance the newly received positive charge of a particular chemical ion, the dye molecule is said to discharge a positive ion, which in turn makes the molecule fluoresce. Clark says, “It’s unique because it doesn’t have any components to be used up. Other monitors, even nanosensors, have a limited lifetime, which makes implanting them difficult.”

Clark hopes that their developed sensor may one day have the capability to be injected into the skin’s surface layer, much deeper than tattoo inks. This would be followed by a measuring of the tattoo’s emitted light via a fluorescence monitor.

The researchers state that a more detailed analysis is required before the device can be tested in human subjects. In spite of not having revealed an immune reaction in the animal tests, the researchers feel that a deeper analysis needs to be conducted on the beads.